The School’s main aim was to train teachers in drawing, but special classes in art subjects, and technical evening classes including mechanics and engineering, were also offered to fee-paying adults.

To reflect its curriculum the name of the School was changed to the Wellington Technical School in 1891.

In 1905 the School’s scope was widened when a technical high school was added to the existing programmes to cater for the needs of children who left school, but were not yet ready for employment. The School was subsequently renamed the Wellington Technical College.

Throughout the following decades the Technical College’s academic programmes continued to expand. By the early 1960s the numbers of tertiary students far exceeded that of secondary students at the College. In 1962 the polytechnic and high school divisions of the College were separated and the Wellington Polytechnic and the Wellington High School was brought into being.

Thus in 1962, the Wellington School of Design became a School within Wellington Polytechnic. Under its Director, James Coe, the School consolidated and developed the multi-professional approach to scholarship in a central design discipline, with an integrated suite of undergraduate qualifications and research.

The School of Design became the country’s flagship design school and the main distinguishing feature of the Polytechnic.

Since its inception the School of Design has enjoyed a long and prestigious history, producing many of New Zealand’s most notable and famous designers, and is now home to over half of all design students studying in New Zealand. 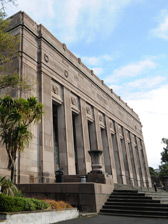