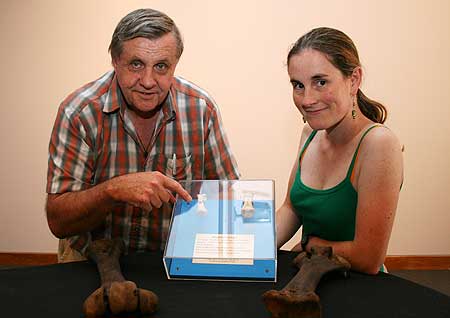 Listen to the Radio NZ item.

New research indicates the moa may not always have been flightless.

The research, by Professor David Penny, Elizabeth Crimp and Gillian Gibb of the Allan Wilson Centre for Molecular Ecology and Evolution, has found that moa were closely related to the tinamou, a breed of South American birds.

The team was led by former Massey student Dr Matt Phillips, who now works at the Australian National University in Canberra.

DNA analysis indicates the tinamou is the closest relative of the moa within a group of birds known as ratites, which includes kiwi and other flightless birds such as the cassowary, ostrich and emu.

Although moa are extinct, it is possible to sequence their DNA from well-preserved bones.

Tinamou, of which there are about 47 species, are the only members of the group that can fly, though only poorly. They are found throughout central and southern America.

“It now appears more likely that the ancestor of the moa flew, or was blown, to New Zealand via Antarctica before it froze over,” Professor Penny says. “There are well over 100 cases of birds becoming flightless on Pacific islands because of the absence of mammal predators.”

Ms Gibb is completing her PhD on the evolution of birds in New Zealand under Professor Penny, which includes this current research.

“We did some more DNA sequencing from kiwi and also new analysis of the data set for the ratites,” she says. “The re-analysis shows that the ratites probably lost flight independently of each other, rather than the ancestor of all ratites being large and flightless, as traditionally thought.

“We’ve known for about 15 years that kiwi possibly flew to New Zealand – escaping from Australia – but no one realised that moa may have too.”

Previous theories pointed to moa being established on the land that would become New Zealand as it broke away from Gondwana more than 80 million years ago.

The research was published in this month’s Systematic Biology, an international science journal.