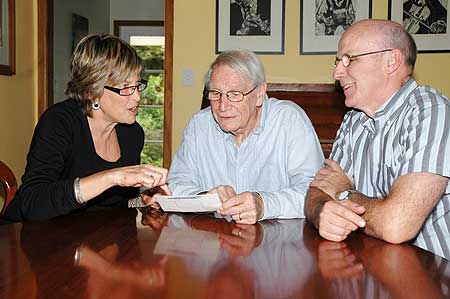 Dr Leo Roache celebrates his graduation as
Doctor of Education with two of the College
of Education’s senior staff and his former
school pupils, Dr Tim Burgess and
Dr Kathleen Vossler.

Dr Roache, from Palmerston North, who graduates today, interviewed a broad range of homeschooling families to find out why parents chose to home school and how they went about it. Where previous research revealed similarities in beliefs and practices, he found that each homeschooling family had unique reasons and methods.

These commonly included a wish to control the influences on their children’s learning, dissatisfaction with schools, religious beliefs, concerns about the influence of other children and desire to maintain a family culture. Teaching curricula, developed by parents, in consultation with their children, and based on their perceived needs and abilities, were in harmony with their reasons for choosing to homeschool, Dr Roache says.

“Some students just need stimulation and interesting ideas to challenge them. The new [2007] curriculum is a very good step towards allowing that and it’s about the best curriculum I’ve seen – even though I don’t believe it is necessary. It encourages kids to think, and teaches them to work independently. In the early curriculum, you simply didn’t do that.”

Dr Roache, 80, taught standard four (year six) at College Street School in Palmerston North in 1964 and recalls two of the "smart cookies" in his class, Kathleen Vossler (nee Cutler) and Tim Burgess, both of whom are also Doctors of Education as well as senior academic staff in the University’s College of Education.

Both Dr Vossler and Dr Burgess recall that year as something special – a time where they were engaged in investigating things that interested them, motivated to pursue understanding and knowledge. Dr Roache does not take credit for their success. “They did it, not me. Pupils make their own choices and learn for themselves. I just had to be there."

He believes most children are capable, independent thinkers, and the best teachers are there to facilitate learning, not simply to make it happen. “I believe that all kids can think independently from a very young age, but our society discourages it. The rule was that the teacher told and the kids – apparently – learned. As a result, I always thought that curriculum was a waste of time. It was a prescribed framework that didn’t necessarily fit the kids who were supposed to be learning.”

As a teacher, Dr Roache had Massey staff come and give talks to his class on a range of topics and even took his pupils on field-trips to the University campus to see research and learning in action. “This was never mentioned or even thought of in the curriculum; we just did it. There was no restriction. When we went to the library the children just read."

Do what you enjoy and you will succeed, business graduates told
'Stay true to values' graduates urged