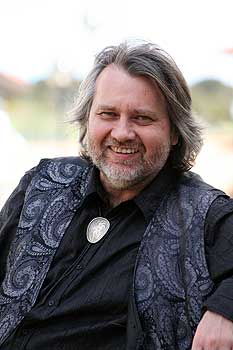 The Asia-Pacific Association of Theoretical and Computational Chemists announced this week it has awarded the medal to the Albany-based scientist for his achievement in quantum chemistry, in particular for his deeper understanding of quantum relativistic effects.

The medal is named after Japanese chemist Kenichi Fukui (1918-98) who was co-recipient of the Nobel Prize for Chemistry in 1981. Candidates for the medal must be nominated by three eminent scientists.

Professor Schwerdtfeger is the director of the Centre for Theoretical Chemistry and Physics at the University's Institute for Advanced Study.
"This is a great honour for me,” he says. “Looking at the other medallists, you see why.’

In November Professor Schwerdfeger, whose research has helped explain the physics and chemistry behind the colour of gold, was awarded another prestigious international science prize, the Humboldt Research Award. The German-born scientist gained a degree as a chemicotechnical assistant at the Chemisches Institut in Stuttgart, Germany, in 1973, a chemical engineering degree from Aalen in 1976, and a PhD in 1986 from the University of Stuttgart. He has held a numerous positions as teaching and research fellow at universities in Germany, Australia and New Zealand.

His Marsden-funded projects include experimental and theoretical investigations of the nanostructures of gold for a better understanding of the quantum size effects in nanostructured materials, and understanding and modelling the behaviour of dynamic clusters of atoms and molecules in heavy metal clusters. He has supervised PhD students and collaborates intensively with more than 30 research groups worldwide on topics ranging from computational inorganic and organic chemistry to materials science and high-resolution spectroscopy. He has been the recipient of six Marsden grants totalling $4 million.