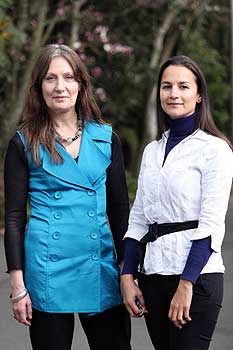 Personal accounts of near-death experiences are wanted for the first large-scale study of the phenomenon in New Zealand.

Researchers Dr Mary Murray and Dr Natasha Tassell estimate that up to a quarter of those who have come close to dying may recall undergoing some form of near-death experience.

A near-death experience can occur in a variety of circumstances, whether someone has been under anaesthetic during a surgical procedure, been involved in major trauma such as car crash, or suffered a stroke or heart attack.

“It’s a known phenomenon but we don’t know how it occurs and exactly how prevalent it is,” says Dr Tassell, a lecturer with the School of Psychology. Dr Tassell had a personal experience after she simply felt unwell, lay down and underwent the process. She recalls travelling down a tunnel with a bright light at the end. She cannot explain her own experience but feels the lucid and memorable nature of it corroborates what is reported by others.

“Each experience is unique to the individual, and they are often very lucid, remembered in detail many years after, and produce significant and beneficial changes in the person’s life.”

Dr Murray, a sociologist and senior lecturer in the School of People Environment and Planning, says research she has read suggests people frequently report an experience where they leave their body, can see their body from a distance or feel they are looking down on their physical body. "They often go on to encounter a range of phenomena, including travel down a tunnel, meeting others, including deceased loved ones, talk of seeing a beam of white light, and often see their life quickly pass before them.”

Dr Murray’s fascination with the subject stems from a long-term interest, reflected in a paper she teaches on the sociology of death and dying. She believes gaps remain in the available research.

While near-death experiences have been the subject of studies overseas, including medical research, the Massey researchers are interested in finding out about New Zealanders' experiences to understand whether they are similar, what variations there are and whether there are cultural dimensions to the range of experiences.

Dr Tassell says previous anecdotal and empirical reports suggest that such experiences are in no way reflective of any psychological difficulties on the part of the people who have had them.

Both researchers have published papers on aspects of death, dying and near-death experiences and they have received assistance for the two-year project from Massey University women's research awards.

Any responses will be treated in confidence under ethical guidelines.