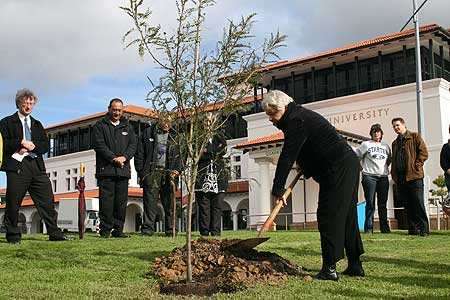 Dr Eleanor Rimoldi, one of Dr Michael McCool's doctoral supervisors, places soil around a kowhai tree planted in his honour. 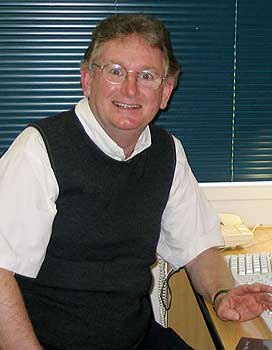 A kowhai tree has been planted at the Albany campus in memory of Dr Michael McCool.

University staff members and family and friends of Dr McCool gathered at the Student Memorial Grove on Tuesday.

Dr McCool's PhD in social anthropology was awarded posthumously at a graduation ceremony on April 15. He died suddenly, aged 57, less than a month before graduation.

His long-time friend, colleague and Massey graduate Dr Margot Symes was one of several who shared memories of Dr McCool at the gathering, describing him as a "very special man" who broke new boundaries for all students when he spearheaded a fundraising campaign for fellow undergraduate anthropology students to attend a conference in the mid-90s – not something they expected to do as undergraduates at that time.

She said Dr McCool, who suffered from multiple sclerosis, was unceasingly kind and spent much time over the years visiting and supporting others with illnesses and disabilities.

Dr Eleanor Rimoldi, one of Dr McCool's supervisors at the School of Social and Cultural Studies, said her former student overcame major health issues to complete his thesis, and taught her a great deal about the potential of students with disabilities in the university environment.

Regional registrar Andrea Davies said he was a major influence in shaping policies that made the University more welcoming and accessible to disabled students.

Anglican Reverend Bert McLean formally blessed the tree with a Maori remembrance karakia. The tree planting was an official University Memorial Service arranged and conducted by the Chaplains.