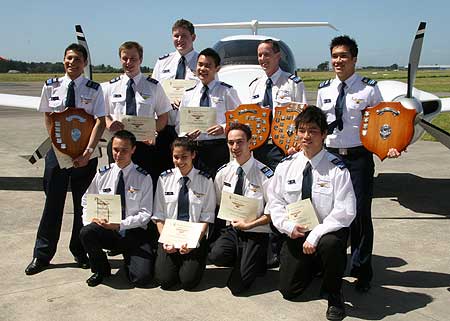 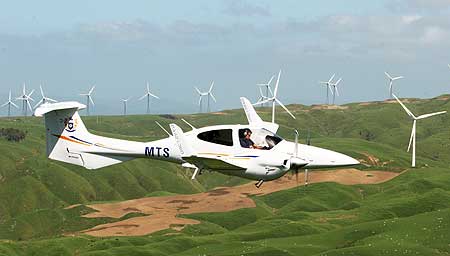 The DA42 over the Manawatu wind turbines.

The University's School of Aviation yesterday welcomed the latest additions to its fleet – two Diamond DA42 twin-engine aircraft that complete the $8 million 14-aircraft purchase announced last year that put the school at the forefront of international aviation training.

The official handover of the aircraft from the University Vice-Chancellor Steve Maharey to the school general manager Ashok Poduval was held at the Milson Flight Systems Centre at Palmerston North Airport.

The DA42 has the same cockpit display systems, Garmin 1000 avionics, as the single-engine DA40 aircraft, which will make the transition training from single-engine to twin-engine aircraft simpler.  The aircraft are also equipped with the latest technology, such as moving map displays and terrain avoidance warning systems.

Mr Maharey told the students the degrees they are studying for are highly-regarded worldwide, and he was proud of the programme and the people involved in aviation at Massey.

Mr Poduval says the arrival of the twin-engine aircraft makes Massey the only provider of aviation training in New Zealand with a full fleet of glass cockpit aircraft. The planes are known as TAAs, Technically Advanced Aircraft, by the United States Federal Aviation Administration, he says.

“In keeping with Massey’s philosophy of being a defining University, we are modifying our flight training syllabus from traditional training methodology to scenario based, learner focused training that encourages the practical application of knowledge and skills," Mr Poduval says. "This training methodology has been introduced by the Federal Aviation Administration in the United States in partnership with industry and academia to develop the risk management skills and in-depth systems knowledge needed to safely operate advanced technology aircraft that have more automation.”

The School of Aviation was established in 1990. It is part of the College of Business and is also a certified flight-training organisation, has ISO 9001-2008 accreditation, and holds an equivalence approval from the New Zealand Civil Aviation Authority. It is the only flight-training organisation that holds such an approval, under which students are exempt from the requirement to pass the professional licence examinations for issue of licences by the authority and the University exam results are accepted in lieu of those. Flight examiners from the school are approved for conducting flight tests for the issue of licences.

The school is one of the few institutions in the world that offers degrees in aviation with integrated professional pilot training. It also offers aviation management programmes at undergraduate, postgraduate and doctoral levels. Graduates are employed in numerous airlines and aviation organisations worldwide.