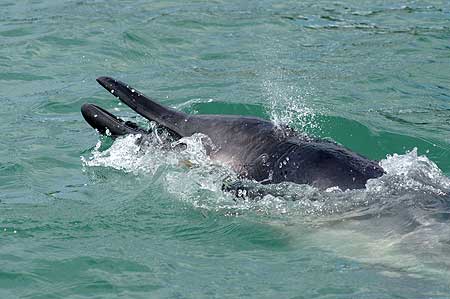 The Gray's beaked whale in the shallow waters of the Whangaparaoa Peninsula (Photo by Karen Stockin). 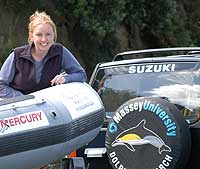 The decision to shoot and kill a rare Gray's beaked whale stranded at Stanmore Bay, north of Auckland, last weekend was a humane one, says the Massey marine biologist who conducted the post-mortem examination, Dr Karen Stockin.

Dr Stockin says the whale was ill, not merely underweight, and she is keen to reassure the public that the decision by Conservation Department staff to kill the whale was necessary to prevent further suffering.

She has been inundated with calls from people upset by the shooting. The whale had been seen in shallow water in the Whangaparaoa area for several weeks prior to its death.

During the post-mortem Dr Stockin found the 4m juvenile male to be sick and in very poor body condition.  “The whale had a severely congested liver, a factor which likely played a role in the animal's pronounced muscle atrophy and severe emaciation,” she says.

“I am concerned that the public still doesn't understand that this whale was sick.  This is not the same as saying this animal was simply underweight and that feeding it would have fixed its underlying health issues,” she says. “An attempt to re-float would have been inhumane and only resulted in further distress and injury.”

Dr Stockin has been involved in refloating stranded marine mammals for more than 10 years and understands why the public want to see these animals rescued.

“In the case of healthy independent animals, that's what usually happens. However, we were dealing with a sick whale of questionable maturity - we could not be confident this animal was even fully weaned let alone independent enough to survive on its own.”