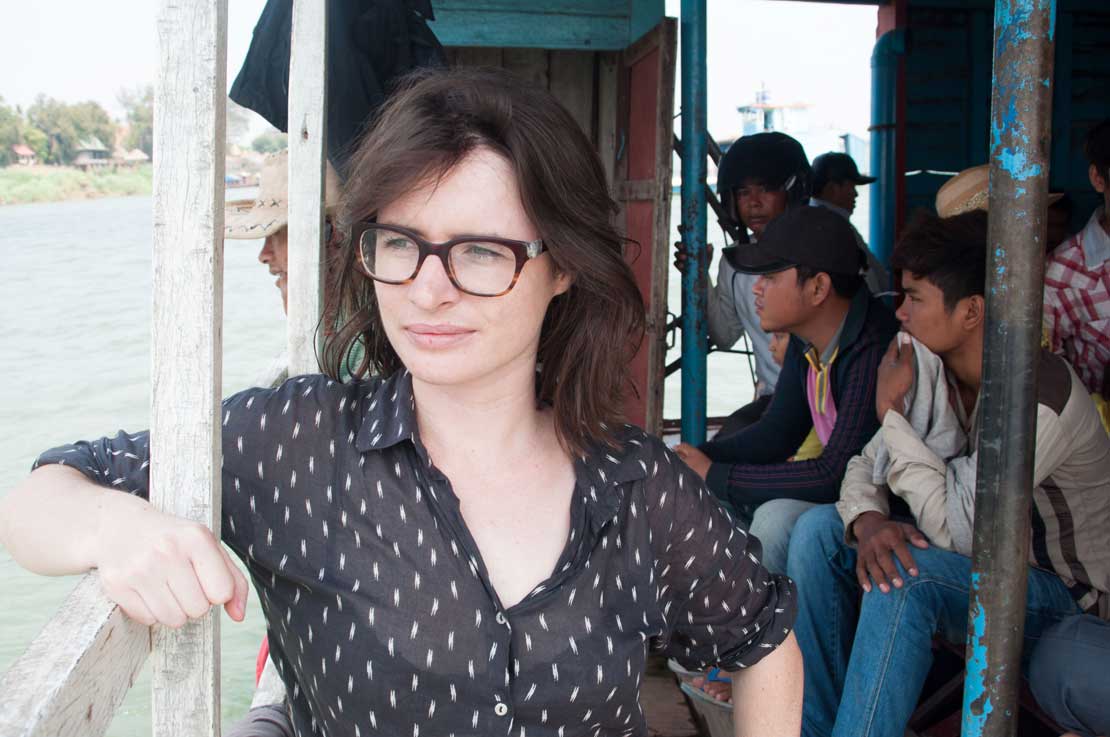 Distance learning student Amanda Saxton, pictured in Cambodia where she is an intern at a Phnom Penh magazine, A speech on native birds’ struggle for survival and a speech inspired by Lesley Elliott, mother of Sophie Elliott, are among the winners of Massey University’s Pro-Chancellor’s prizes in Speech Writing and Feature Writing.

The four prizes, of $200 each, were awarded to the top distance students and top internal students in Speech Writing and Feature Writing. They were donated by Massey University’s Chancellor,  Chris Kelly.

Tracy Brighten won the distance prize in Speech Writing.  Tracy drew on her knowledge and love of native birds to tell people how they can help endangered birds by being responsible cat and dog owners and beach visitors.

Her speech was inspired by the music of Edvard Grieg’s In the Hall of the Mountain King and an occasion when she and her family stood in a covered trench at Penguin Place on the Otago peninsula, watching a penguin meet its chick.

“If you’ve been to Penguin Place and run through tunnels linking hides as you follow a solitary penguin from the beach through dunes to meet its chick, you will know there is reason to care."

The winner of the internal Speech Writing prize was Lauren Crimp.  Lauren wrote a hypothetical speech for speaker Lesley Elliott, whose daughter Sophie Elliott was killed by her ex-boyfriend.

The idea for her speech was sparked by a spike in media coverage of domestic violence in New Zealand.  She began her preparation by listening to Lesley Elliott speak.  “She is a very powerful speaker, even in the difficult task of giving evidence during Weatherston’s trial.”

Ms Crimp says the theme that struck her was the importance of speaking up. “I have a strong belief that unless taboos – or perhaps fears – around asking for help are broken, the cycle will remain, and the issue which is unfortunately so prevalent in our country will go on unresolved."

The distance prize for Feature Writing was won by Amanda Saxton, a student intern at a magazine in Phnom Penh. Amanda wrote her feature on Western physiotherapists working in Cambodia. The idea for the story arose when she wondered why many local people in Phnom Penh use crutches, but physiotherapists she met always lamented their lack of Khmer clients.

Her investigation led her down an intriguing path. “At first I thought it was a simple money issue, but it turned out to be more systemic — culture and corruption were at play.”

Emily Elliott, a Wellington student with a background in design, won the Feature Writing prize for internal students. Ms Elliott’s feature was about Auti, a toy developed for autistic children.  She was inspired by former university student Helen Andreae, who broke the brief of her Design assignment and instead created a toy that could change the lives of autistic children.

As Ms Elliott delved into the topic, the designer’s story resonated with her. She liked the way Helen was a university student going after her dreams and goals, and at the same time making a difference for hundreds of children and their families. “Coming from a design background myself, I was especially interested.”

Dr Heather Kavan, lecturer in Speech Writing and Feature Writing, said the students’ writing reflected their deep desire to do good in the world. She said the prizes “recognise not just the work that goes into writing, but also qualities like intellectual courage, a passion for truth, and the ability to enthral”.