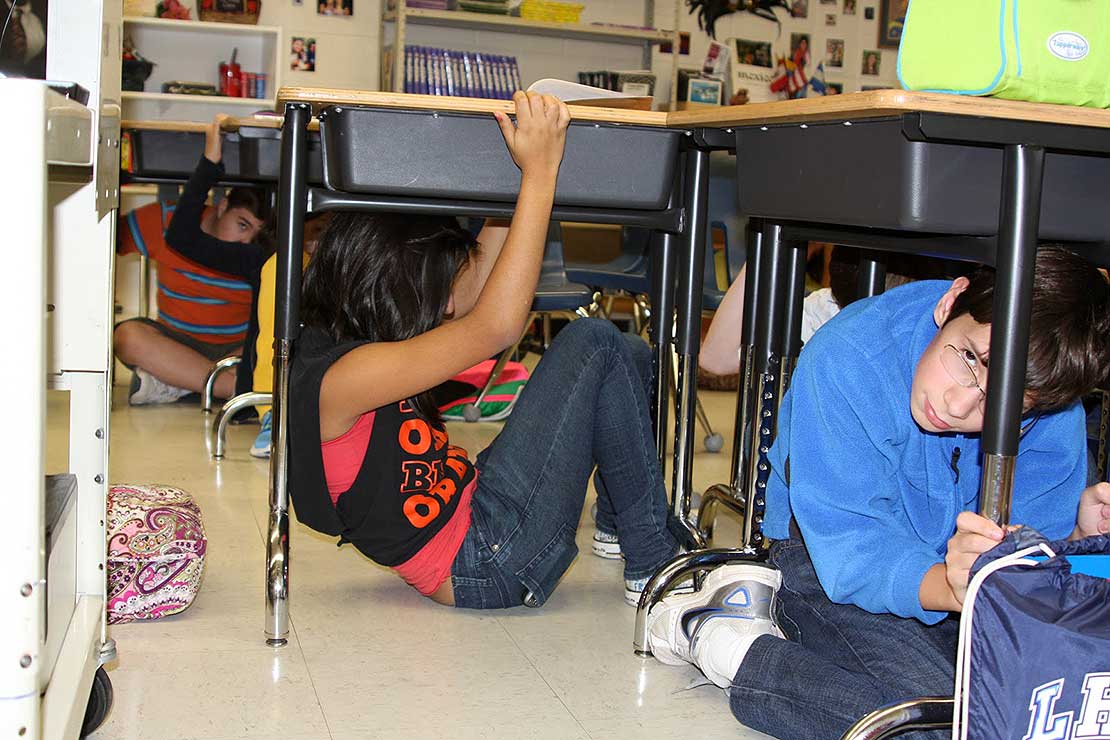 School children practice the drop, cover and hold drill, which featured in research by PhD graduate Karlene Tipler into how prepared schools were in the event of an emergency.

‘Be prepared’ are watchwords for all New Zealanders making emergency plans but revealing findings from Massey University’s Joint Centre for Disaster Research show that schools could be doing better.

Undertaking three separate but linked studies, doctoral researcher Karlene Tipler found there was a difference in the preparedness levels and response capabilities of some schools over others – though all had a variety of ways in which to anticipate an emergency ranging from the development of emergency plans, to providing students with hazard education and conducting frequent drills.

Dr Tipler undertook surveys of more than 350 schools that participated in the 2012 Shakeout national earthquake drill to determine different levels of preparedness.

Dr Tipler will be conferred with her PhD in emergency management at Massey University graduation ceremonies at the Michael Fowler Centre in Wellington on Thursday.

Her period of study from 2011 onward, coincided with a growing appreciation by the public following the the Canterbury earthquakes, for the need to be prepared in the event of an emergency.

“It was a turning point for schools’ to say ‘you know, we really have to think about this,’ ” she says. Preparatory tactics employed by schools included one where a primary school teacher who undertook regular ‘micro drills’ with her class in addition to the school’s regular drill programme, worked with students to practice the drop, cover and hold instructions or told them to ‘do the turtle,’ (where an individual crouches down on the ground and covers their head, neck and arms).

Some schools scheduled drills for days when part-time teachers were working, so they were familiar with emergency preparation practices should an incident happen on their watch.

“What you want is for the kids to know what to do even if there wasn’t an adult to look after them,” Dr Tipler says.

“If kids are adequately prepared and know what they’re doing then they can cope with that, if they’re in a situation where no-one’s in control and they’re not sure what’s going on, that upsets them.”

When it came to researching how schools responded to an emergency, Dr Tipler observed significant differences.

“I looked at the phase from the fire alarm going off through to kids going back to class or being reunited with their families. Considering that is all stuff you practice with drills there had never been another study like this done before.”

Her research also included three separate true-life case studies of Wellington schools that had experienced a bomb threat, flood and earthquake respectively to see how principals, teachers administrative staff and parents responded to the emergencies.

One Wellington secondary school that received separate bomb threats a month apart took the lessons from the first scare and applied them the second time round. Another school at Porirua, following the Seddon earthquake of August 2013, had let their children go home, unaware of the damage to Wellington and cuts to transport links, later established an informal school policy stating if the same scenario recurred all children should be instructed to return to school if no-one was home.

Her research also found that some schools were unaware of some of the sort of things they should be doing, such as considering different varieties of alert systems, planning for reuniting children with parents or guardians, planning for students with disabilities or special needs and using drills to evaluate the effectiveness of such plans.

“If schools plan for four types of emergency, everything fits into that,” Dr Tipler says.

She identified that if a focus was made on shelter-in-place (for example placing children inside away from a dangerous dog), lockdown (an outside threat where the children need to be kept safe), building evacuation (for example in a fire) and relocation (tsunami risk), “It shouldn’t matter what the emergency is,” she says.

Dr Tipler also observed innovative ways in which schools helped out their students in the midst of a breaking emergency,  In one school where a child wasn’t coping well they were kept occupied, by putting them in a high vis vest and given a small task to do, while being supervised by a staff member, she says.

She also offered ideas to school staff dealing with children in an emergency who were communicating their anxiety via smartphone to increasingly concerned parents.

“My suggestion, as much as you can manage this, is that any message [from the school] to parents be sent to the children too. So, they’re at least getting the same message as their parents are.”

Other key lessons reinforced how essential preparation was for an effective emergency response; the need for confident and decisive leadership along with effective communications; managing the emotional needs and supervision of students while an emergency was taking place; the benefits of evaluating the response and sharing lessons with other affected schools in the aftermath of an emergency.

Aside from investigating emergency preparedness and response in schools, her studies also examined the legislative requirements needed to ensure the safety of students in school care.

She recommended that benchmarks related to preparation levels be established and that standard operating procedures for core emergency response actions ( ie shelter-in-place, lockdown, building evacuation, relocation and family reunification) be developed to provide a consistent approach to school-based preparedness efforts.

Before undertaking her PhD and an earlier Masters in Physical Geography with an interest in natural hazards from Victoria University, Dr Tipler worked as a secondary school geography teacher. In between her studies she also worked at the Wellington Emergency Management Office in the aftermath of the Canterbury earthquakes when there was an increase in requests for such emergency preparation and response advice.

“That emergency management office experience, my teaching experience and my interest in disasters all came together.”

In the heat of an emergency she believed if schools followed some basic guidelines, staff with children in their care would emerge better prepared from the experience.

“Managing your message out, reassuring parents that their kids are as safe as can be, that school is doing exactly what it should be doing and that they will keep them [parents] informed. I’m not sure there is much more you can expect a school managing a crisis to do.”