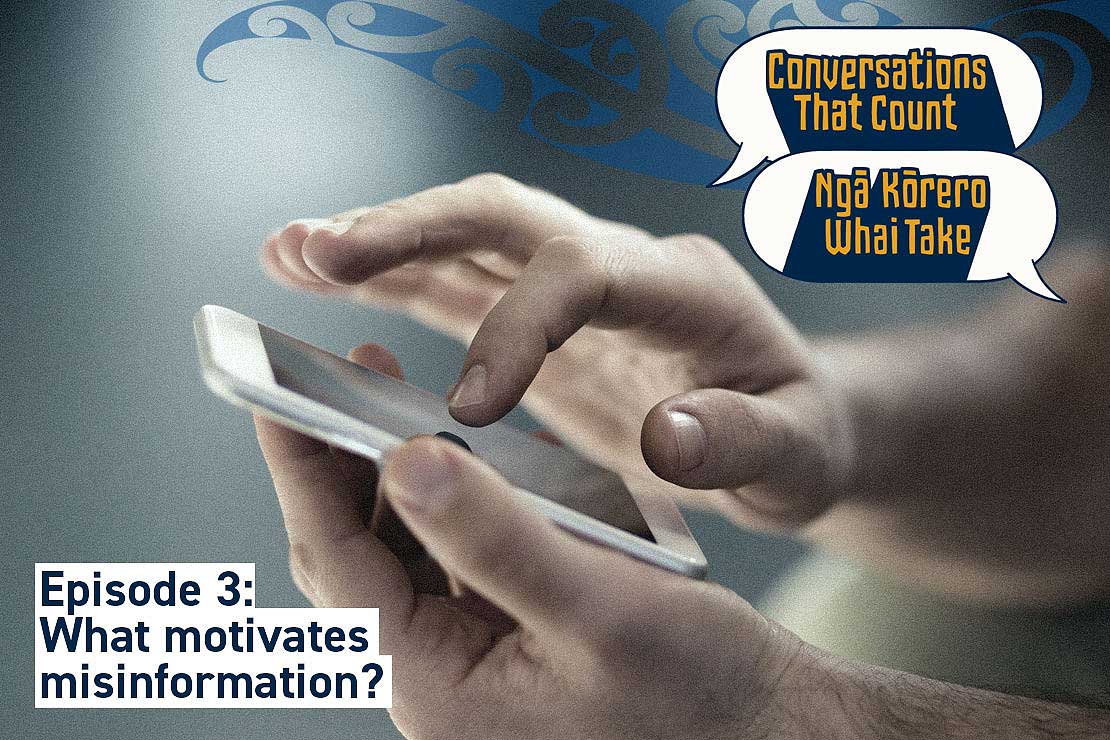 Simply recognising that there’s an issue isn’t enough to solve it. Our guests discuss different approaches to navigating misinformation.

In some ways, the large-scale wave of disinformation which has swamped New Zealand’s streets and social feeds throughout 2020 comes without surprise. Faced with a catastrophic global pandemic and a commensurately wide-ranging response from our central government, it’s to a degree understandable that members of the public – particularly those predisposed to distrust either the parties in power or the system in toto – would seek alternative explanations for the realities we’re facing. And for those who’ve been looking, such theories have been unfortunately easy to come by.

But although the modern media environment has made it undeniably far easier for bad actors to spread bad info, did this problem really start on our social feeds? And regardless of where it originated, how can we collectively address the issue now that it’s taken hold? These are just two of the vital questions posed in the third edition of Conversations that Count – Ngā Kōrero Whai Take, available now on your podcast platform of choice.

Produced in partnership with The Spinoff and hosted by experienced broadcaster Stacey Morrison, this episode sees Massey University Professor Richard Shaw joined by academic researcher and science communication specialist Dr Jess Berentson-Shaw, for a kōrero that spans everything from the surprising history of disinformation in Aotearoa to how we as individuals can act in stopping its spread – as well as what we should be asking of our elected officials to achieve the same.

Dr Berentson-Shaw is well versed in the causes and conditions that give rise to what she terms “false information”, and believes that it’s important to delineate between the various forms that it can take – as well as the motivations of those behind its creation and distribution.

“We know that what we call ‘disinformation’ tends to be made by people with malicious intent ... people who create it in order to gain something from it – power, money, wealth, political influence. Misinformation tends to be false information that’s spread by people who don’t have malicious intent. In fact, often people might be spreading it because they’re concerned or they’re worried or there’s actually genuine care at the heart of it. That distinction, between those wilfully seeding malinformation as a means to disrupt and those who genuinely believe they’re doing the right thing, is one which has become only more meaningful this year. In a joint survey conducted by Stuff and Massey University earlier this year, respondents who consumed the bulk of their news either via social media or word of mouth (as opposed to mainstream media sources) were more than five times more likely to believe that the COVID-19 virus was an intentionally created bioweapon. Perhaps even more alarmingly, members of those groups were more than ten times more likely to believe that the virus was ‘an invention of shadowy forces that want to control us’.

But while those numbers clearly reflect the essentially unchecked influence of social media, and the resultant potential for harm which it presents, to place the blame entirely at the feet of fringe groups and individuals on the internet is to grossly oversimplify the issue. In a piece about a Singaporean state action against ‘fake news’, produced last for the Asia Media Centre, Massey Dean’s Chair Professor Mohan Dutta pointed out that in some international cases, “the impact of digital hate is more pronounced because it is sponsored by the state”.

By a similar token, Professor Shaw – director of Massey’s Bachelor of Arts program and a professor in the university’s politics faculty – is quick to point out that the genesis of the false information phenomenon and its use by those in power comfortably predates the advent of contemporary communication tools.

“If anybody’s read anything about the events that led to the invasion of Parihaka on the 5th of November 1881, look at the activities of John [Bryce] who was the native minister at the time. The case, and the narrative that was constructed around the use of violence and the Pāhua up there, that’s a really beautiful case study – and I use the word ‘beautiful’ advisedly – in the construction of a deliberately disinformed story to justify a state action. This stuff has been with us for a considerably long time.”

Where to from here?

Of course, with an issue as pressing and existential as this one, simply recognising that there’s an issue isn’t enough to solve it – and as both guests acknowledge, expecting everyday media consumers to be able to apply academic rigour to every news source they encounter probably isn’t realistic. As Morrison succinctly puts it, “We’re going to need our rangatahi to be able to critically analyse a 15-second TikTok, and to be able to have the dexterity of thought to ask ‘Is this true? Can I cross-check that?’”

For Berentson-Shaw, the first step towards achieving that goal is to increase the population’s general information literacy, and to improve our collective ability to weigh up the validity and veracity of our sources.

“I do think there needs to be some sort of switch in the way that we think about teaching critical thinking, and that it needs to start earlier than it currently does. It has to be grounded in an understanding that there’s a huge amount of false information that’s currently created.”

Crucially, both our guests and Morrison alike agree that it’s important to ensure our efforts to correct the cycle of false information don’t unintentionally serve the opposite purpose; entrenching bad facts, habits and attitudes through an overly hostile approach. While Professor Shaw acknowledges that there are some views and opinions which are in his opinion “so repugnant and so violent...that there is a case for deplatforming” those people responsible for their dissemination, in the vast majority of cases he believes a more gentle approach is generally a better one.

“What you don’t do is disparage them, you don’t call them names, you don’t dismiss them … because that’s a sure-fire way of driving them further into the rabbit hole. So maybe what you also do is you hold your peace and you listen, and you have conversations with others.”

Listen to the podcast

What motivates misinformation? In the third episode of Conversations That Count – Ngā Kōrero Whai Take, we attempt to find out. Subscribe and listen now via iTunes, Spotify or your preferred podcast platform.