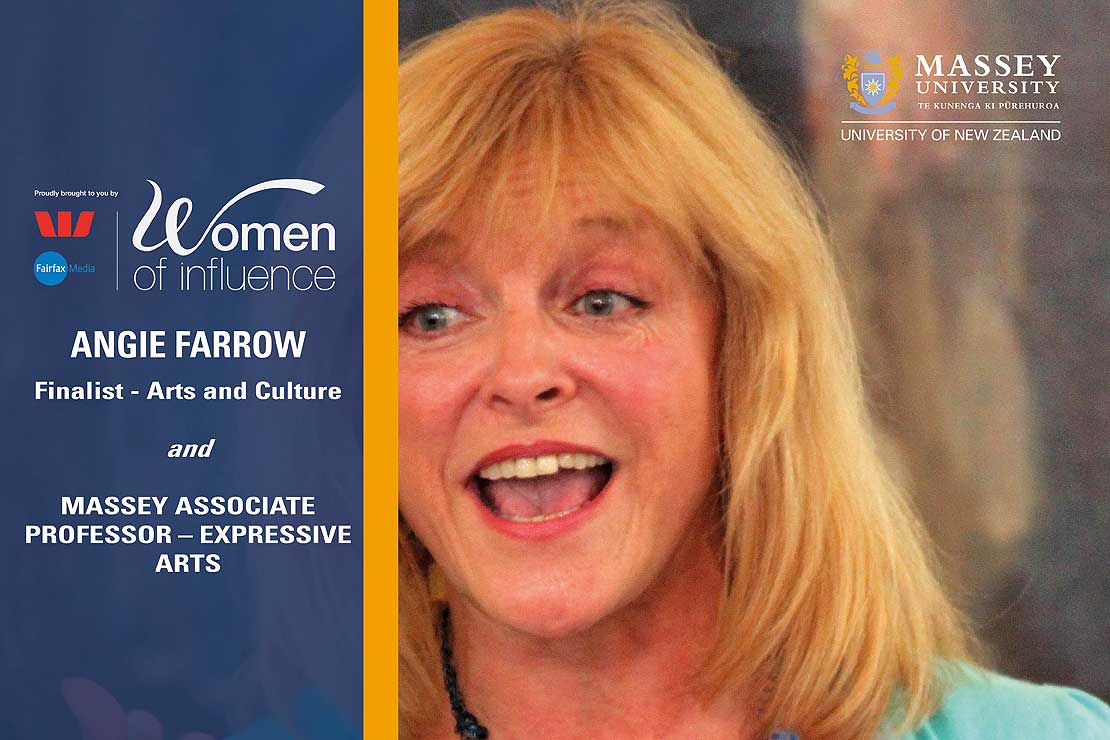 Massey University is proud to have nearly 20 per cent of the 101 finalists in this year's Women of Influence Awards. The awards aim to recognise and celebrate those who make a difference to other New Zealanders. Over the coming weeks, we will showcase some of these finalists, all of whom are inspiring women who are Massey staff or alumnae.

Associate Professor Angie Farrow is a senior lecturer in the School of English and Media Studies and a multiple award-winning playwright. She specialises in performance drama, public speaking and other aspects of the creative process. In 2010 she won a national tertiary teaching award. She has inspired legions of creative writers, actors and directors, and has been instrumental in nurturing numerous arts projects and events in the Manawatū, including Summer Shakespeare and Arts on Wednesday at the Massey campus.

Who is the female mentor who has most inspired you?

Well, she's not exactly a mentor, but a great leader and huge influence on me: Helen Clark. I love her courage, her lack of vanity, her politics, her individuality. She is a leader amongst leaders whose vision is rarely compromised. I feel proud to have been around on her watch when she was New Zealand's Prime Minister.

What’s the one piece of advice you would give a young woman starting out in her career?

To young women, I would say that having influence is not just about thinking of your own advantage, but how you can advance others. Be generous, be a good listener, be assertive, but always look out for the greater good. Leading is also about being authentic and allowing people to see who you really are.

What’s the single achievement you are most proud of?
My greatest achievement is my daughter Leda. Can I take credit for her grace and vivacity and creativity and kindness? Probably not. But I did launch her into the world! Otherwise, my greatest achievement has been in building a creative culture and especially at Massey and in the Manawatū. This has been a dedicated process of creating events and institutions, writing plays, expanding horizons and pushing walls down. I feel proud of the lives that have been changed and the joy and magic that have been generated through this work.

What are you currently trying to achieve using your influence?
I believe in the creative life. Promoting creativity in others and giving them a sense of their own power and complexity and mystery is at the centre of my work as a teacher and mentor.

The 2016 Women of Influence Award winners will be announced at an Awards Dinner at SKYCITY in Auckland on October 12. To view a full list of finalists click here.