What I learned from a new generation of activists and leaders Associate Professor Elspeth Tilley behind the camera at Festival for the Future, where festival participants took the opportunity to try news-reading on-screen as part of a Massey exhibit showcasing the Bachelor of Communication. 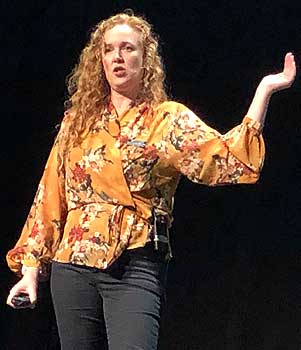 
I came away from the recent Festival for the Future (FFTF) in Wellington with a great sense of hope for our future. The young people I met over the three days were without exception highly informed, extremely motivated and equipped with a wide range of skills, strengths and resources to offer solutions to big issues such as climate change, inclusion and mental health.

They were uniformly courageous and determined to give their all to their communities and to those most in need of help. Typically, these future leaders (actually most of them are current leaders, not waiting to grow old to show leadership but already active on youth councils and at the forefront of important social movements), already had 90 per cent of the ideas and resources they needed to make a genuine impact on a crucial issue. The role of FFTF was to offer that final 10 per cent step needed to make their next action happen. This could be to connect with like-minded others so they could see they were part of a much bigger change movement, to reaffirm their voice and confidence, or solve a final piece of the strategic puzzle of how to communicate about an issue in order to move forward. It was a privilege to be there and learn with and from these astute, enthused young people.

Some of the important things they taught me or reminded me to value included:

Elspeth Tilley is an associate professor in expressive arts at Massey University, which was a sponsor for Festival for the Future. She spoke on using the arts to accelerate climate solutions, and hosted a roundtable with young people exploring their thoughts on creative activism. Festival for the Future is an annual conference run by Inspiring Stories Trust.