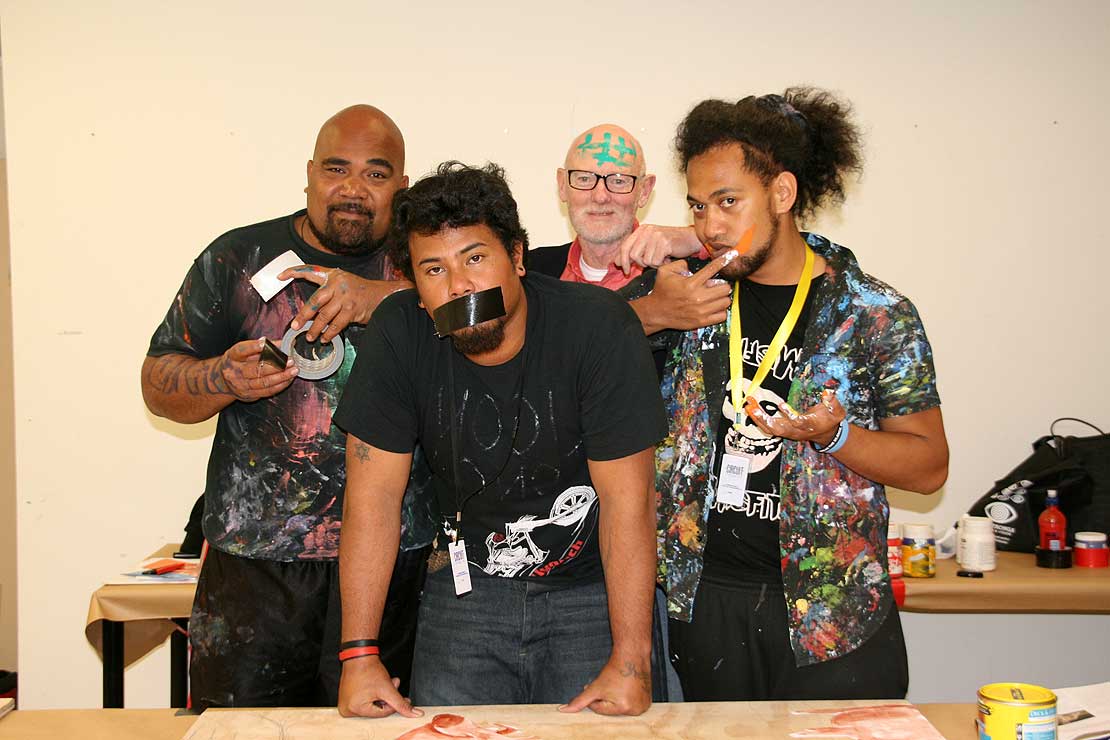 An avant garde Tongan artists’ group currently based at Massey University’s College of Creative Arts has brought its unique brand of modern Pasifika art to Wellington.

While in Wellington, members of Tonga’s Seleka Club including Tevita Lātū, David Hamani, Taniela Petelō and Virginie Dourlet will work with Massey students, meet groups of artists and be involved in several events.

The club was set up by Mr Lātū in Nuku’alofa in 2008 and has been an artistic home for more than 100 young people since then. Almost every night of the week, up to a dozen emerging young artists gather in the club’s fale built from salvaged timber and coconut fronds to drink kava and make art.  “The group is an open house and sometimes a halfway home for some of the young people who may have dropped out of school or be from broken homes,” Mr Lātū says.

Its inception was the result of Mr Lātū ‘s desire to give back to his homeland after years of studying art in New Zealand and Australia. It is now home to some of the most progressive art created in the Pacific region.

School of Design senior lecturer, Euan Robertson, met the group when he attended the Pacific Arts Association conference in Nuku’alofa in October 2015.  He says there is a real opportunity for Massey to facilitate an art/design programme to help Tongan youth. “This is the start of something, not the end.  We would love to see a pilot programme developed connecting Massey with the club in Tonga,” he says.

One of the cornerstones of the club is its acceptance of non-conformism and they aim to facilitate conversations within the Kingdom of Tonga, which stands at a crossroads between traditional ways and the modern world now easily accessed through the internet and social media.

Mr Lātū says an important aspect of the club is to help people in the community like the elderly and widowed, to show that while club members may be non-conformist, they are still part of the community.  “People give us things and we must do the same. There are a lot of young people in our group and we want to use our energy on doing something positive by helping people and hope they can accept us more,” he says.

The Seleka Project was funded by Massey’s Pasifika directorate and Think Differently, a series of collaborative, cross-campus projects which aim to develop employable and innovative students. The residency, which ends on Thursday was also timed to coincide with Tongan Language week earlier this month.