Home > About Massey > News > Student's idea a cut above the rest

Student's idea a cut above the rest 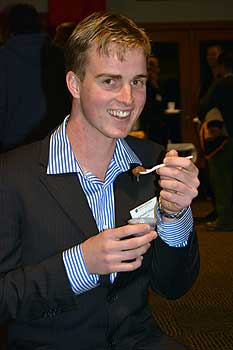 An ex-builder's brainwave to make a dust-free fibre cement cutter has landed him a $5000 study bursary at Massey University and place on the ecentre Sprint programme to develop his idea further.

David Mountain, a Bachelor of Engineering student on the Albany campus, won this year’s Go Innovate! competition with his invention that makes cutting sheets of fibre cement less dangerous, dusty and noisy.

Mr Mountain narrowly edged out food technology student Campbell Ellison, who developed a dairy-free ice cream after a university assignment as part of his Bachelor of Food Technology degree.

The judges felt that Mr Mountain’s product was “truly innovative” as there was nothing like it currently available. They were also impressed with the video he produced of his prototype in action.

Mr Mountain said when he was a builder he was always looking for better ways to do things.

“That could be frustrating for the people who I was working with who just wanted me to do what I was told,” he said. “But this is a product that I would definitely have loved to have had when I was a builder.”

Taking out the Go Innovate! competition was an emotional experience for Mr Mountain who said, as a kid, he’d always wanted to be an inventor.

“It’s quite emotional for me because when I was 18 I didn’t think I was smart enough to be an engineer, so this is the realisation of a dream for me, to be able to design something and see it turned into a real product. I want to spend my life doing this kind of stuff.”

He said he was looking forward to working with the ecentre to develop his product further and was open to partnering with a major construction company in the future. He was confident that his design could also be adapted to cut sheet steel products.

The People’s Choice award, worth $500, was won by Mr Ellison who handed out samples of his dairy-free chocolate ice cream to the audience and judges. He said there was a large global market of lactose intolerant people and, by substituting milk products with coconut cream, his ice cream would also make a healthier treat for health-conscious consumers.

Mr Mountain now wins a place on the ecentre Sprint programme at the University’s business incubator, which will help him with market validation and advise on the best way to advance his idea.

Steve Corbett, ecentre chief executive, said it was “a buzz and an honour” to judge the competition each year and he encouraged students to get involved.

“This competition is the best use of your time while you’re at university. You learn so much and there are so many people willing to get in behind you. It’s a real part of the Albany campus that you should embrace and be part of,” he told the audience.

“This year we’ve also managed to secure funds from the university’s Strategic Innovation Fund to put some students through the ecentre Sprint programme, so we are really keen to see as many students as possible knocking on our doors so we can help them to take their product or idea forward.”

Now in its fourth year, Go Innovate! is run by the Business Student Group and is open to any Massey Albany student with an innovate idea that has real business potential. The competition aims to foster innovation and entrepreneurship, while helping students to build cross-college relationships and connections with the local business community.