Tavira, in Portugal, the self-proclaimed proverb capital of the world where scholars and enthusiasts meet each year. (Wikimedia Commons).

Ah, the proverbial academic conference – for Classical Studies lecturer Associate Professor Gina Salapata a recent trip to a conference in Portugal was literally all about proverbs.

It was through sharing her own knowledge and enthusiasm for proverbs of the world with Manawatū Standard readers three years ago that led to her being invited to participate this month in the 12th Interdisciplinary Colloquium on Proverbs in Tavira, Portugal. It is the self-proclaimed World Capital of Proverbs – the annual meeting point of specialists from all over the world.

Dr Salapata, based in the School of Humanities, has long been fascinated by proverbs. She launched a project to involve the rich and diverse multicultural community of Palmerston North in the collection of proverbs from different cultures to celebrate the city’s diverse population and highlighted the common threads among cultures.

“People from a wide variety of ethnic and cultural backgrounds – about 35 different ethnic communities – submitted proverbs they remembered from their home country, had grown up with, or that resonated for some reason,” she says. “A number of these proverbs were displayed in the City Library during Poetry Week and a selection was published weekly for a period of six months in the Manawatu Standard.”

Three years later, the president of the International Association of Paremiology (a Greek term meaning the study of proverbs), an association supported by UNESCO, tracked her down through the online publicity of her community project and invited her to participate in this year’s ‘proverbial’ gathering in Portugal, from November 4 to 11.

“The colloquium, promoting intercultural and intergenerational dialogue, was attended by 100 delegates (the largest number ever) from 28 countries, and it was the first time New Zealand was represented, a fact greatly appreciated by the organisers,” says Dr Salapata. Associate Professor Gina Salapata (second from right) with participants at the 12th Colloquium on Proverbs.

Short phrases with a powerful message

She says the event was “a very interesting, friendly and rewarding gathering of specialists in linguistics, literature and folklore, but also many proverb enthusiasts fascinated by these gems of popular culture that distil many years of wisdom in simple sentences and reflect the way of life of previous generations.”

“Presentation topics ranged from considering the concept of change associated with Brexit through the prism of proverbs, the use of proverbs in Brazilian popular music, and how traditional South African proverbs may be perpetuating a rape culture, to the misuse of traditional proverbs and invented pseudo-proverbs to manipulate public opinion in Nazi Germany against the Jews.” 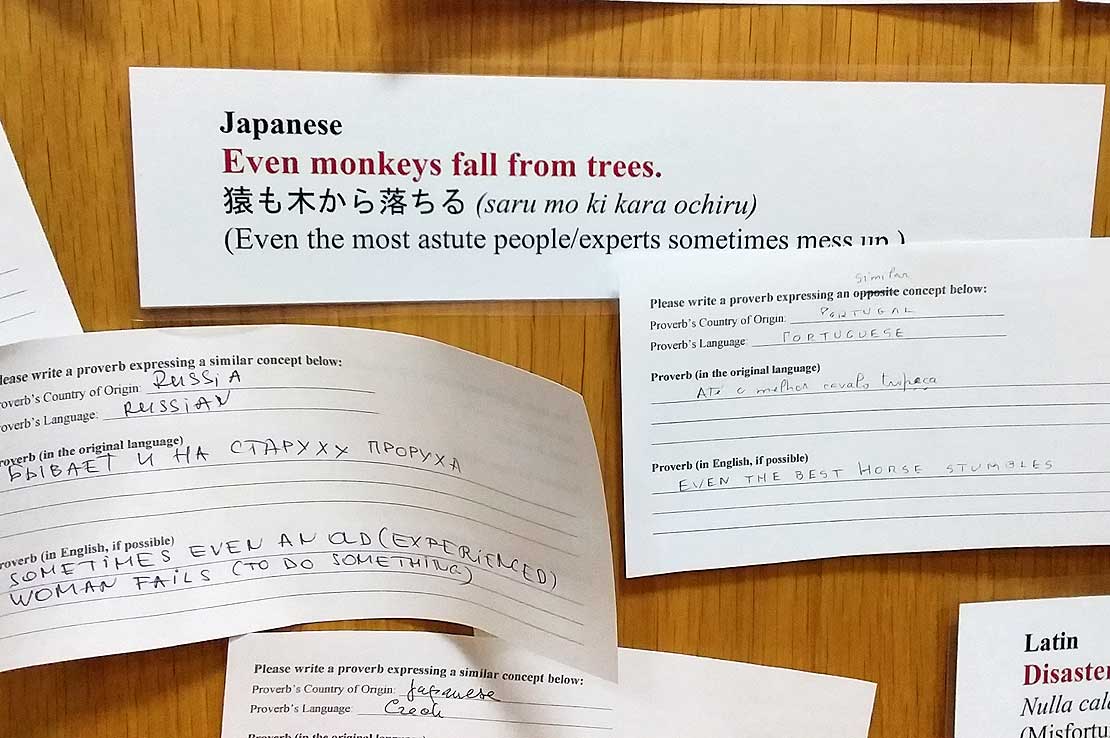 Some proverbs shared at the colloquium.

For her presentation she organised two activities based on proverbs collected in Palmerston North, designed to engage the conference participants in comparative and creative work on proverbs from around the world.

The first was called Celebrating Cultures Through Proverbs: Provide Similar or Opposite Proverbs and aimed to highlight common threads that unite cultures. “I invited participants to think of proverbs from their own cultural experience expressing a concept similar or opposite to proverbs from a variety of cultures collected in Palmerston North and displayed during the colloquium. They had to write them on a form and pin it under the appropriate proverb. One of the proverbs that elicited the most parallels was the Japanese proverb: “Even monkeys fall from trees.”

In the second activity, Celebrating Cultures Through Proverbs: Sketch a Proverb, designed to stimulate creativity and make participants consider proverbs from different cultures from a visual perspective and, again, using the displayed proverbs from Palmerston North.

Dr Salapata says she was “excited to have been in the company of many proverb afficionados and have lots of ideas to collaborate with colleagues here and overseas, with local schools and community organisations to promote proverbs and the cultural heritage they represent.”