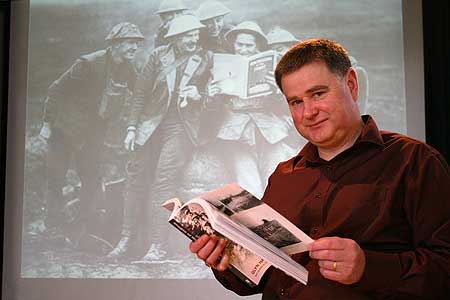 Anzac surgeon’s memoir to be re-published 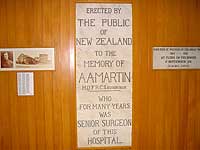 A plaque and photos dedicated to the
memory of Major Arthur Martin at Palmerston
North Hospital, where he was the senior
surgeon before enlisting and being killed in
World War I.

Military historian Professor Glyn Harper has been invited to contribute the introduction to a new edition of a classic World War I memoir written by Major Arthur Martin, who was the senior surgeon at Palmerston North Hospital before the war.
Major Martin’s book, A Surgeon in Khaki, was published in 1916 – the year he was killed while serving with the Royal Army Medical Corps (RAMC) in northern France.

Professor Harper, who is director of the University’s Centre for Defence Studies, was invited to write an introduction to a new edition by the editor of University of Nebraska Press, Alicia Christensen, who describes the original work as “a fascinating account of the front lines during the early part of the war".

Ms Christensen says Major Martin was an advocate of treating soldiers' severe injuries as soon as possible even amidst the heat of battle and under fire. He died in hospital in Amiens after being wounded on the battlefield at Flers and was posthumously awarded the Distinguished Service Order.

Professor Harper says further information about Major Martin was revealed in the 1920s book The New Zealand Medical Service in the Great War. “After a brilliant career as a student at Edinburgh, he served in the South African war, and after taking his fellowship, returned to New Zealand where he was appointed surgeon to the Palmerston North Hospital. In 1914 he was in America doing postgraduate work and, on the outbreak of war, had returned to England where he at once joined the RAMC."

Aside from his surgical expertise, Major Martin also instigated key changes with the RAMC including the introduction of motorised ambulances, Professor Harper says.

A plaque dedicated to Major Martin stands on the site of a since-demolished old hospital wing at Palmerston North. A flag and tablet at the city's All Saints Church are also dedicated to him. The book, with Professor Harper's contribution, will be republished in time for Anzac Day next year.