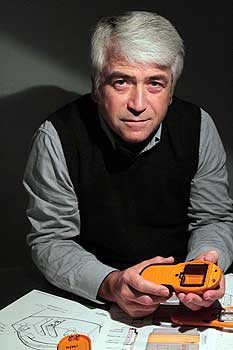 Health researcher Professor Marlena Kruger from the School of Food and Nutrition and industrial designer Professor Tony Parker from the College of Creative Arts have been named the individual winners of this year’s Massey University Research Medal.

The medals honour an exceptional body of research carried out by staff over a period of years.

Members of the Animal Welfare Science and Bioethics Centre from the College of Sciences are winners of the team award.

Professor Kruger, from the College of Health, has contributed to the development and leadership of a bone health research team and leads a large programme of research investigating the role of various nutrients, foods, bioactives and small molecules in the protection and maintenance of bone and joint health.

Her research advances knowledge on bone function and structure, introducing information of the effects of lifestyle, nutrition, environment and ethnicity on bone mass and hormone status to support bone health.

At a time when the population continues to age, Professor Kruger’s research has been described as critically relevant in generating knowledge to maintain mobility in older people.

He is New Zealand’s leading University-based industrial designer, a top-ranked researcher, whose expertise within the University context has been recognised in New Zealand and internationally. His industrial design career has resulted in more than 70 commercialised, mass produced, creative outputs.

Professor Parker’s substantial contribution to New Zealand design, including his design work for Gallagher, has seen him win multiple awards and invitation to exhibit at international events. His design expertise has been applied across a wide range of experimental and commercialised products from the Hulme supercars, to security equipment including card access door readers, petrol station forecourt dispensers and other capital equipment.

“Few groups at Massey University can match the breadth and depth of their research outputs and their more than 600 national and international presentations,” Professor Kenyon says.

In 2007 the World Organisation for Animal Health adopted the centre as its major collaborating centre in the animal welfare arena – a first for the southern hemisphere. Additional indicators of the huge success of this group include more than $7 million in research funding, more than 90 postgraduate student completions and expert advice offered to more than 30 government advisory committees and authorities.

The individual university supervisor medal has been awarded to Professor Kevin Stafford from the Institute of Veterinary, Animal and Biomedical Sciences. The medal recognises Professor Stafford’s exceptional record of scholarly and practical support for, and successful supervision of, numerous postgraduate students over at least two decades.

Supervisor awards for the colleges are awarded to Professor Margaret Walshaw from the Institute of Education and Distinguished Professor Sally Morgan from the College of Creative Arts.

Chair of the awards panel Professor Giselle Byrnes, who is Assistant Vice-Chancellor Research, Academic and Enterprise, says there was strong competition among the nominations received.

“Massey has world class researchers across all of our disciplines and we are justly proud of this year’s winners. The competition was very tough, attesting to our consistent quality across the various categories.”

The research medals and awards will be presented at a ceremony early in 2017.