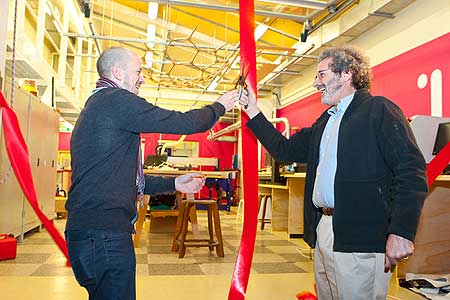 The digital fabrication lab has been well-tested over the past week as Massey and MIT have jointly hosted Fab8NZ in and around the facility as part of the eighth annual meeting of the international Fab Lab network.

It has attracted makers, designers and other people who use digital fabrication technology from around the world. Countries represented included Afghanistan, Australia, Belgium, China, Finland, Germany, India, Japan, Kenya, the Netherlands, New Zealand, Norway, Peru, Russia, South Africa, South Korea, Singapore, Spain, the USA and the UK.
Fab Labs began as an outreach project from MIT’s Center for Bits and Atoms in 2003. To be MIT-affiliated, a lab must adhere to a set of operating principles and provide a standard range of equipment, including basic laser cutters, milling machines and 3D printers. Massey’s is the first in Australasia, but Mr Jackson hopes the idea will spread rapidly, as Fab Lab Wellington acts as a hub to get labs set up across New Zealand and into the South Pacific.

Being part of the global Fab Lab network opens up huge opportunities for New Zealanders, Mr Jackson says. “Fab Lab projects are open source and can be shared between labs. Fab Lab Wellington can give individuals and small firms access to technology, but also help them make connections between disciplines and industries, and that should be a catalyst to more innovation in New Zealand.”

Fab Lab Wellington will have designated open hours for the general public, including workshops where people can learn from Massey’s industrial designers.

Fab8NZ ends this evening. One of the final events – the “Fab World Cup” – will see participants demonstrate ‘flying machines’ they have made, in the Great Hall at Massey’s Museum Building in Wellington, 4.30-5.30pm.