The giant petrel after surgery.

A plastic spoon, a pink balloon and some sharp unidentifiable plastic was taken from stomach of a giant petrel at Massey University’s Wildbase Hospital.

The bird wasfound floundering in the sea by surfers at Castlecliff and was brought to Massey by New Zealand Bird Rescue on Sunday.

The plastic was removed from the bird’s stomach by gastroscopy, where a flexible fibre-optic scope is put into the bird’s stomach, under general anaesthesia. This procedure is carried out when seabirds come into Wildbase Hospital to look for foreign bodies in the stomach.

The birds also get a range of other tests including blood work and x-rays to look for the cause or causes of their illness.

“We aren’t just talking seabirds, but dolphins, sea lions, sea turtles and much more. The team was very excited to remove the contents from the stomach, but the sad thing is that many animals who swallow plastic will die before they make it to us. They are fighting a battle just to survive long enough for someone to notice and bring them here.” 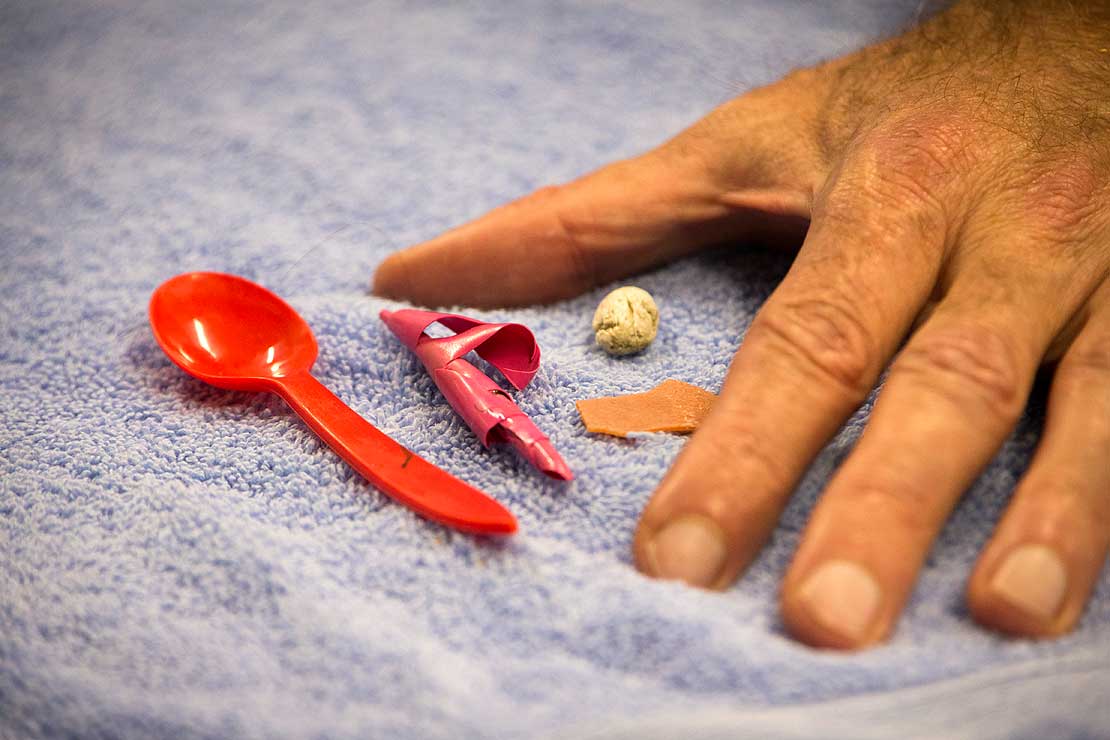 The objects taken from the petrel's stomach.

X-rays, which are taken from every bird who enters the hospital, cannot detect latex or plastic in the animal's stomach and is often only found during a post mortem examination. The plastic can sit in an animal’s stomach preventing other food from being digested, can cause irritation to the stomach’s lining, gastric ulcers, or in rare cases can move into the intestines and cause more serious obstructions.

While the total number of animals affected by plastic each year is unknown, Professor Gartrell says, “It is a global problem and we know it is killing seabirds, marine mammals and sea turtles right throughout the world. New Zealand is lucky to have a rich and unique range of coastal and marine wildlife and keeping plastic out of the oceans is an important way of protecting them. Our choices matter, so make sure they're sustainable!,” says Professor Gartrell.