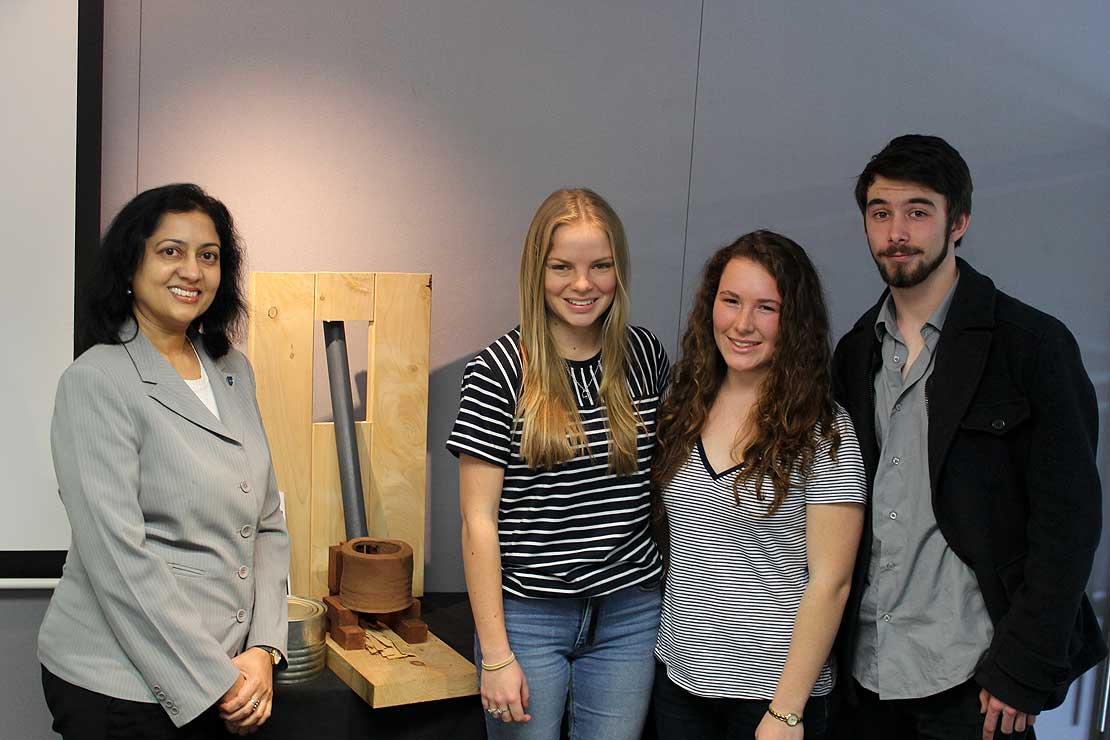 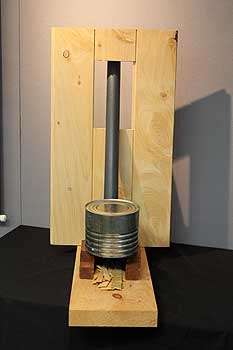 Taking on their Australian counterparts in a first-year engineering challenge has seen three Massey University students come out tops in the annual Engineers Without Borders (EWB) Challenge.

The team, comprising Demi Noakes, Lydia McGlashan and Nathaniel McTaggart, also won the 2014 New Zealand EWB competition – the first time a team including women has achieved this, and the third time a team from the Auckland campus has won. It was the perfect way to round out their academic year.

The team’s supervisor, senior lecturer in the School of Engineering and Advanced Technology (SEAT) Dr Aruna Shekar says it was an incredible achievement.

“We are so proud of Demi, Lydia and Nathaniel for winning the EWB Challenge against their Australian counterparts. They had to explain their concept to a panel of experienced judges, which would have been very nerve-wracking,” she says.

The group created a practical stove solution which vented smoke from cooking outside their homes, using affordable items easily obtained in the region. Smoke inhalation from cooking is a major health hazard in Nepal.

“The students were able to empathise with people in a Nepalese village, and really put themselves in that context,” says Dr Shekar.  “We have found that students who actually understand the problems well come up with better solutions. In this case, these students learnt that Nepalese women and children spend many hours gathering firewood for cooking and spend most hours in a cramped kitchen full of smoke. Hence they were keen to create a better stove that also fits well into the Nepalese lifestyle.”

Ms Noakes and Ms McGlashan flew into Melbourne on the day of the presentation, while Mr McTaggart arrived two days earlier. They had to get brochures and presentations printed on the way to the awards presentation.

“I actually wasn’t as nervous in Melbourne as I was for the Auckland finals,” says Ms Noakes. “We were more concerned about getting the prototype into the country, and getting to the venue, that it wasn’t until we turned up that we realised we were presenting in half an hour.”

Competition for the prize was fierce, and the team didn’t think they had a chance.

“There were three prizes up for grabs – a sustainability award, the People’s Choice award, and the overall award,” says Ms McGlashan.

“There was an all-girl’s team that the judges loved, and we geniunely thought they were going to win,” says Ms Noakes. “They named them first – they won the People’s Choice award, and the Sustainability award, and I thought they were going to have a clean sweep. Before they announced the overall winners, the judges said it was clear who the winner was and they were trying to decide between second and third, and I thought maybe we got second or third, and then they named us as the winners and we just sat there…”

“We just had looks of shock on our faces,” says Mr McTaggart.

“I just sat there for what felt like ages, and I’d already started feeling really disappointed, and I was already deciding what flavour ice cream to have on the way home… when they named us – and after that the whole thing went really quickly – we got up, and got the certificates and it was all over,” says Ms Noakes.

The team received certificates for their prize along with an all-expenses paid trip to Melbourne, and an impressive addition to their CVs.

“It was pretty cool to win,” says Ms Noakes.

“And the fact that our stove could be implemented in Nepal is pretty amazing,” says Mr McTaggart.

The competition is part of a first-year engineering paper, which provides students with the opportunity to learn about design, teamwork and communication through real, sustainable, affordable and cross-cultural development projects. EWB New Zealand works with developing communities to create sustainable, positive change through humanitarian engineering projects. All the student reports submitted for the EWB Challenge are given to the community partner to support their development.

Now back at university and in their second year of their engineering degree, the three are focused on where they want to work when they graduate.

“I’d like to work for a robotics company, and eventually create my own company to use robots for humanitarian purposes,” says Mr McTaggart.

“I’d like to work overseas, but I’m applying to the Air Force to become an officer,” says Ms Noakes.

“I want to major in product development and see where that leads me,” says Ms McGlashan.

“As Massey is one of four universities heading the world’s first Twinning and Networking Programme of the United Nations Educational, Scientific and Cultural Organisation (UNESCO) in humanitarian engineering, this result shows what students can do to help under-served communities, when we provide them with a learning environment to explore such possibilities.

“Our distinct project spine that runs throughout our degree enables students to practice engineering in a multitude of environments, creating more grounded engineers that employers want,” she says.

For more information on Engineers Without Borders, go to their website.