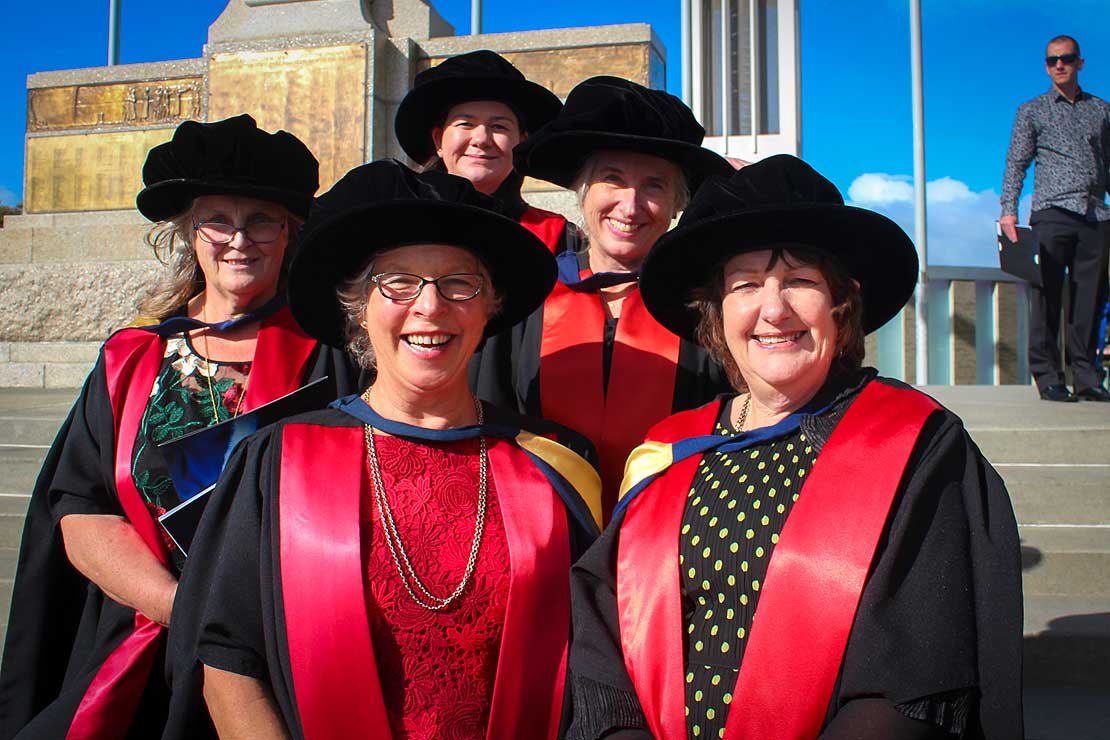 A record number of Massey University doctoral graduands will cross the stage at celebrations in Palmerston North this week.

Of the 450 graduating in three ceremonies at the Regent on Broadway on Friday, 59 will receive the premier academic qualification, something Vice-Chancellor Professor Jan Thomas says is reflective of excellence in postgraduate study.

“This is worthy of celebration,” Professor Thomas says. “Every doctorate requires a lot of hard work and perseverance. And beyond the personal benefit to the lives and careers of the individuals, the research they have completed represents a benefit the whole of Aotearoa New Zealand through the new knowledge it generates.”

Research topics include finding ways to reduce phosphorous in waterways, the social wellbeing of women in the army, the development and implementation of Māori cancer navigator’ roles as providers of support for patients with cancer, and the ethnic and socio-economic factors that affect children’s sleep.

“We work to recruit, develop and retain high-quality researchers at Massey,” Professor Byrnes says. “These 59 doctoral degrees will bring the total number of Massey doctoral graduates to over 3500, achieved through personal graft, of course, but also through the creation of the best pathways for researchers. For instance, next year we will have 200 postgraduate research scholarships available.”

Massey will also confer two honorary doctorates and one Doctor of Science. An international honorary doctorate, just the fourth in the university’s history, will be bestowed in ceremony one, to Dilmah Tea founder Merrill Fernando of Sri Lanka, in recognition of his strong leadership in ethical business within the food and beverage industry.

Dr Fernando built Dilmah Tea from humble beginnings in Sri Lanka into a global brand and one that is well-known and loved in New Zealand. His connections with Massey date back two decades, to the late 1990s when he worked with Distinguished Professor Paul Moughan, a nutritionist and Fellow Laureate at the Massey-hosted Riddet Institute.

In ceremony three, Professor Michael Ross, of the University of Minnesota, will be awarded a Doctor of Science.

Completing a Bachelor of Arts (Honours) at Massey in 1974, majoring in Psychology, Professor Ross has spent a career studying sexual minority populations, particularly gay and bisexual men, looking at the impact of internalized homophobia on mental health, and on their sexual risk behaviour. He published some of the first studies of sexually transmitted infections including Human Immunodeficiency Virus on gay and bisexual men in East Africa, and on teaching sexual health history taking and counselling to health professionals in Tanzania. He has published more than 500 peer-reviewed papers and 12 books.

Also in ceremony three, former Member of Parliament for Manawatū and Palmerston North’s first woman Mayor Jill White will receive a Doctor of Literature. Mrs White also served as a city councillor from 1983-92, Manawatū-Wanganui regional councillor from 1989-94 and Horizons regional councillor from 2007-13. Her strong interest in the environment was developed in part by her studies at Massey University, where her master’s degree focused on the relationship between Palmerston North and the Manawatū River.

A live stream of each ceremony will be available here.