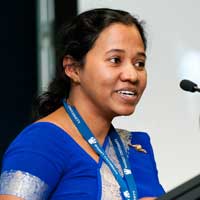 Tertiary Education Minister Steven Joyce today officially launched an international education programme under which the University will train Asian public health specialists and veterinarians in methods of countering the threats of global epidemics such as avian influenza, SARS and Aids.

The World Bank chose Massey as its partner for the $5.2 million programme. The programme is the first of its kind in the Asia-Oceania region and represents one of the few times the Bank has contracted directly with an organisation to deliver a programme. Normally the bank deals only with governments.

The bank manages funding for the training on behalf of the Avian and Human Influenza Facility, a multi-donor trust fund financed mostly by the European Union that supports influenza-related programmes in various countries.

Sixty-seven health professionals from India, Pakistan, Sri Lanka, Bangladesh, Afghanistan and Nepal are currently working towards one of two Massey qualifications specifically developed for the programme – a Master of Veterinary Medicine (Biosecurity) and a Master of Public Health (Biosecurity).

Programme participants are in New Zealand this week for a series of study workshops at Te Papa in Wellington that will continue for two weeks. The teaching programme is made up of online interactive teaching modules supplemented by face-to-face short courses.

Deputy Vice-Chancellor Professor Sir Mason Durie said the partnership is proof of the University’s commitment to being New Zealand’s defining university. “With its leading programmes in veterinary medicine, public health and distance learning, Massey is uniquely placed to offer this qualification,” Sir Mason said. “We are providing a novel solution to a global problem, and our innovative staff from across the University are working together to make a difference.”

He emphasised the integrated approach that was at the heart of the programme. “Staff from across the University are involved in teaching, with the College of Sciences and the College of Humanities and Social Sciences contributing to the two qualifications.”

Sir Mason also paid tribute to Professor Roger Morris, an internationally recognised epidemiologist, whose previous work with world health authorities and the World Bank put Massey in a leading position to be offered the contract.

Professor Morris expressed his appreciation to those who had been involved in establishing the project. “A number of World Bank staff were very constructive in ensuring that it could happen,” he said, identifying Norman Piccioni and Mohinder Mudahar, who "provided the leadership to get the South Asia project established, and made it possible for us all to be here today, with the cooperation and support of Omar Hayat in obtaining the agreement of the European Union, which provided the funding.

“Brian Bedard provided the initial impetus for the project and has been a driving force in getting it established. He is very close to getting a matching project approved for Central Asia, and is in discussions about extending it to other regions of the world.”

Dr Eric Neumann of the University’s EpiCentre is directing the programme, overseeing the academic schedule that is taught by veterinary and public health staff at Massey with help from international collaborators. “We were excited to be approached by the World Bank to build this innovative training programme,” Dr Neumann says. “Dr Daan Vink has led a large team of developers, across the veterinary and public health disciplines, to build the training modules.

“Through partnerships with Massey’s Centre for Public Health Research and other international collaborators, the students will be exposed to a wide range of epidemiological tools for combating everyday health issues. Through their involvement in this programme, students will build lasting relationships with peers in the region. These outcomes will lead to a sustainable improvement in disease response capacity across the region.”

Health professionals who are part of the current cohort of students also spoke at the launch. Dr Rattan Ichhpujani, from the National Centre for Disease Control in India, spoke of how the programme would lead to lasting relationships that would greatly improve co-operation in the battle against zoonotic diseases.