Taking proverbial wisdom to the streets 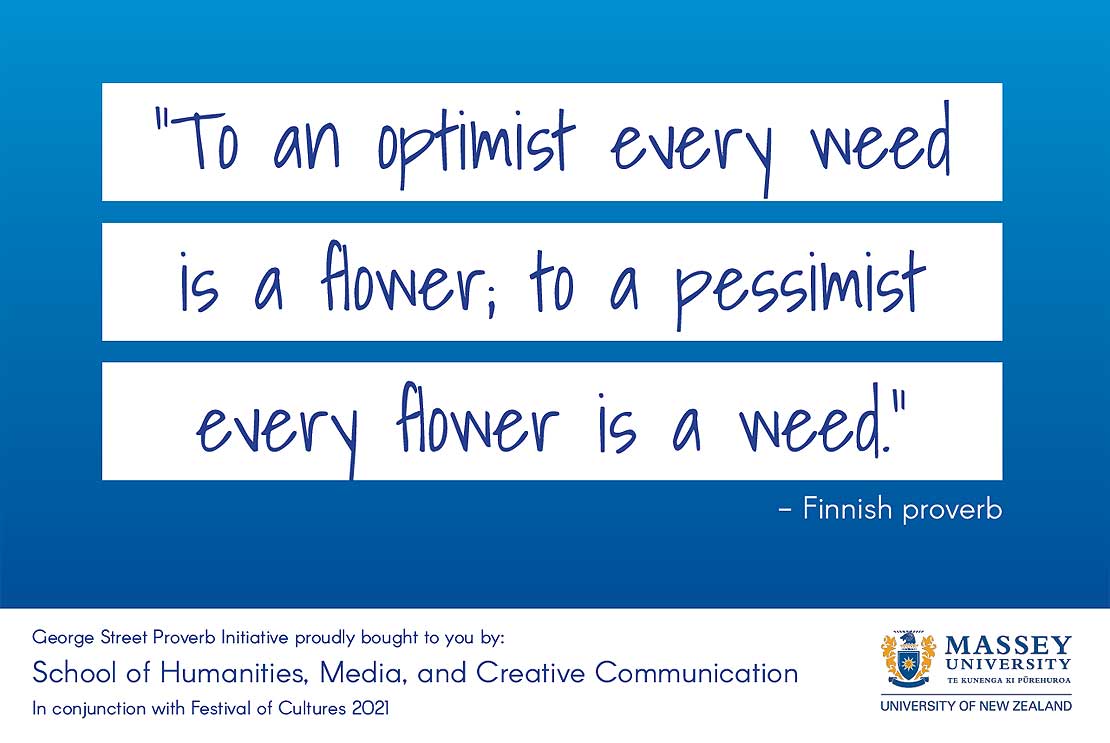 One of the proverbs to feature in this week's George Street Proverbs project – part of Palmerston North's Festival of Cultures. 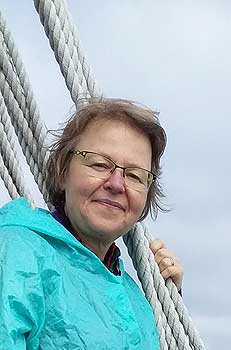 Academics typically feel at home writing erudite articles often full of highbrow language on complex theories. But short, pithy proverbs have provided a minefield for scholarly research as well as opportunities to connect with the community for Associate Professor Gina Salapata.

She has asked business owners and managers in George Street to display on their window a proverb from a culture of their choice (in English translation) during the weekend of the Festival of Cultures.  The proverb signs have been designed by Origin Eight (one of the George Street businesses taking part) and funded by Massey University’s School of Humanities, Media and Creative Communication.

This week’s activity is the latest in Dr Salapata’s ongoing research into proverbs. A Greek national, she has been fascinated by proverbs for a long time and has attended international conferences on the topic.

“Proverbs provide a valuable window into a culture as they reveal specific attitudes and beliefs,” she says. “They also highlight the common threads between cultures and express the human condition in general.”

What’s more, they can be fun, simple to understand and yet packed with truth, meaning and helpful advice that is applicable across generations and geographies, she says.

She is thrilled with the response from the  Festival of Cultures coordinator George Street businesses to her idea and hopes pedestrians will take the time to walk up and down the street and enjoy and reflect on the proverbs, which she defines as a form of common human expression of our fears, wishes and advice for good living (or avoiding trouble).

Sharing proverbs is also a means to generate inter-cultural and inter-generational dialogue, she says.

Proverbs, often passed on between generations orally, can help provide a link to one’s ancestors and can reinforce understanding and cultural knowledge between younger and older generations, especially for migrant children who may not have contact with their grandparents.

Recipe for a proverb

Dreamed up by anonymous ordinary people and sanctioned by the community so that they become familiar, a good proverb needs to be short, simple and to have ‘salt’ (or meaning), says Dr Salapata.

Defined as “compressed folk wisdom of cultural and social value”, she adds that not all proverbs are good or helpful, however. Coined in different times with different views and values, some promote misogyny, racism and bigotry. “There were a lot devised by the Nazis against Jewish people. They can be weapons of propaganda and abuse,” she says.

Another of Dr Salapata’s proverb-related projects is her work with elderly people in rest homes. In 2019 she developed a series of activities and puzzles based on proverbs to help maintain cognitive function in seniors.

“Activities involving proverbs are a good way to foster mental engagement and wellbeing in the aging population, even in people with mild cognitive impairment,” she says in a paper she wrote on the project, which she undertook at a Palmerston North retirement village.

“Proverbs are learned in childhood and form part of the long-term memories of an individual, which typically remain intact in cases of early-stage dementia. Participation in a social activity based on familiar knowledge from the past provides a cognitively stimulating environment and a sense of satisfaction and achievement, all of which would help improve the quality of life and mood of seniors.”

FROM THE GEORGE STREET PROVERBS PROJECT