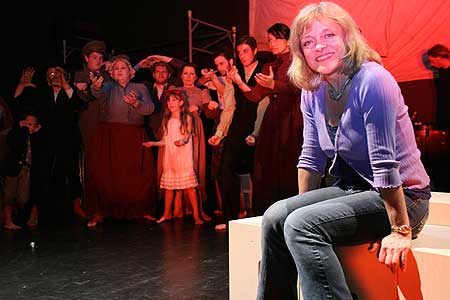 Dr Angie Farrow, who won a tertiary teaching award for sustained excellence, with the cast of the play Before the Birds staged last year and set in Manawatu. 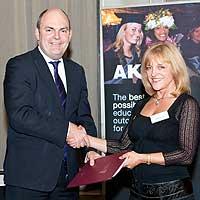 A senior lecturer in the School of English and Media Studies and accomplished playwright, Dr Angie Farrow, has won a  $20,000 national tertiary teaching excellence award.

Dr Farrow, who specialises in performance drama, public speaking and other aspects of the creative process, received her award at a function at Parliament hosted by Tertiary Education Minister Steven Joyce this evening.

She was one of 11 recipients of the annual awards from tertiary institutions throughout New Zealand. Dr Farrow, who has written plays set specifically within the Manawatu community, has also encouraged locals to be part of the productions and learn lessons with a universal application beyond the classroom. "Confidence building is at the heart of my teaching practice, because when students have confidence they are more likely to discover new possibilities within themselves,” she says.

The awards are co-ordinated and run by Ako Aotearoa – the National Centre for Tertiary Teaching Excellence. Ako Aotearoa national director Peter Coolbear says this year’s award recipients continue a proud tradition of teaching excellence. “These are people who open up new horizons for their students and change lives.”

The University's citation accompanying Dr Farrow's nomination for the awards describes her as a teacher who inspires students and brings learning alive. “For her, teaching is a lifelong vocation with the power to transform the students and communities she touches.”

A separate citation prepared for the Massey University's Vice-Chancellor’s Awards for teaching excellence, which she also won this year, said stated she complemented her innovative approaches with great depth of disciplinary scholarship. “This is further exemplified through her leadership in the field, evidenced through the invitations she receives to work with an extensive range of organisations and groups, both within New Zealand and internationally.”

The national awards were established by the Government in 2001 to recognise and encourage excellence in tertiary teaching while also providing and opportunity for teachers to further their careers and share their abilities with others. Dr Farrow is the 14th winner to come from Massey.

The Prime Minister’s Supreme Award, worth $30,000 was presented to senior lecturer in printmaking, Marty Vreede, from the Quay School of Arts at the Whanganui Universal College of Learning.