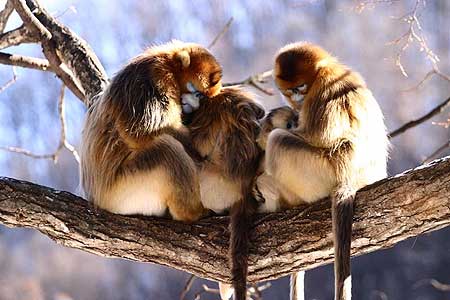 A family of golden snub-nosed monkeys. 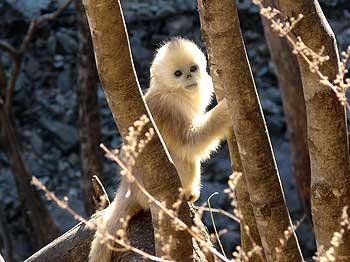 Three Massey conservation biologists are collaborating with their Chinese counterparts at the Shaanxi Institute of Zoology to better understand the feeding and communication habits of the endangered species. In the process they have observed the tree-dwelling primates’ distinctively amicable social behaviour, which includes giving each other soothing hugs to quell anger and tension.

Chinese-born Dr Weihong Ji, based at Massey’s Institute of Natural Sciences at Albany, has studied the Sichuan, or golden, snub-nosed monkey (Rhinopithecus roxellana) for over 20 years and is supervising two postgraduate research projects to find out more about the impact of habitation loss and eco-tourism on the species. The researchers are investigating their nutrition and changes to their vocal patterns.

“We’re working with local primatologists and local authorities to find a sustainable management plan that can serve the needs of these unique monkeys and the people who live in the region,” says Dr Ji.

Golden monkeys are one of five species of snub-nosed monkey, all of which are endangered. They live in forest-covered mountainous terrain in central China, where their populations have been under threat from deforestation. They typically live in social groups of 100 or more, with females playing an important role in determining group formation, unlike many other primates, Dr Ji says.

Among golden snub-nosed monkeys – which appear in the classic Chinese legend of the Monkey King as a seeker of Buddhist wisdom – females determine which males join the extended family group. Males are polygamous, and are caring, doting fathers.

Massey doctoral researcher Brigitte Kreigenhofer, also at the Institute of Natural Sciences, has spent six months in two trips over the past year trailing wild golden snub-nosed monkeys in the Qinling Mountains in Shaanxi, collecting data on what they eat. She is comparing diets of wild monkeys with those in semi-captivity.

Wild monkeys are mainly vegetarian, surviving on leaves, berries, bark, lichen as well as spiders and insects. But another population, which has been herded into a restricted area so tourists can get close to them, are also fed supplementary foods such as corn, apples, turnips, peanuts and peaches.

“Eco-tourism of this type is relatively new in China, and the impact of supplementary feeding on these monkeys is not yet known,” says Dr Ji. “The likely results include weight gain from altered nutritional balance – which we’ve already observed – and changes in social interactions”.

Ms Kreigenhofer is analysing the nutritional components of each group to better understand their optimal diet. One of her supervisors is renowned Massey nutritional ecologist Professor David Raubenheimer, who developed the Geometric Framework to explain the fundamental drivers of dietary behaviour across all species.

Masters student Jonathan Cope is carrying out the first in-depth study of golden snub-nosed monkey vocalisations since the first studies were published in Chinese in the 1970s. He is comparing differences in the repertoire of populations in various regions, as well as with those in zoos where they live alone or in small numbers. He hopes to understand the extent of regional dialects, and which components of their vocalisation are vulnerable to environmental changes – information essential for conserving the species, he says.

“The cultural evolution of vocalisations is not genetic, so studying these dialect differences gives a good base for understanding what happens when populations get moved around or fragmented,” he says.

He is currently analysing hundreds of hours of sound recordings of golden monkey utterances, and has identified a repertoire of calls. These include a contact call to signal whereabouts, which prompts others in the group to respond. They also have calls for alarm, to warn, and to get attention. Juveniles get rowdy with a monkey equivalent of a toddler tantrum accompanied by thumping their feet and shaking their head and tail, triggered by wanting more attention or food from its parent.

While all these calls have an obvious survival motive, there is one sound that remains a mystery, Mr Cope says. A low-pitched sigh, mostly voiced by males, was common among snub-nosed monkeys he observed and recorded in Chinese zoos. The monkeys were housed alone in concrete cells and not part of their natural social group, and are likely to be stressed. But monkeys in the wild also make the sound, which he says could have different meanings depending on the context.

The golden snub-nosed monkey’s inclination to cuddle is not just a projection of human fantasy. Snuggling up to each other may have arisen as a survival mechanism to keep warm in minus-5 degCelsius winter temperatures, and the scientists say hugging has likely evolved into a different function for soothing and placating.

“They are very mellow and tolerant as a species,” says Ms Kreigenhofer. “You can’t help but fall in love with them.”

The research projects are funded by the Shaanxi Science Academy, in collaboration with the Shaanxi Institute of Zoology and the Research Centre for the Sichuan Snub-nosed Monkey at Northwest University in Shaanxi.