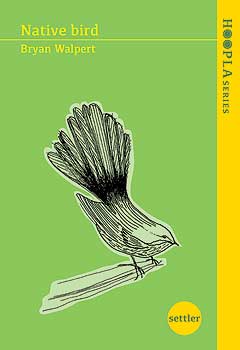 Given the fantail on the cover and the title, readers may be forgiven for expecting Bryan Walpert’s latest poetry book to be a series of odes to ornithology.

In Native Bird (Makaro Press) there’s more than a hint of avian allusion and preoccupation. Kea, kiwi, kakapo and kotuku, as well as tui, saddleback and pied stilt are among the many New Zealand bird references throughout.

But the title, poems and prose poems in the US-born writer’s third poetry collection use his interest in birds – and the language that describes them – as a lens for his observations and insights as a new migrant.

An associate professor in creative writing at Massey University’s School of English and Media Studies, Dr Walpert arrived in the Manawatū just over a decade ago from Baltimore, Maryland via Colorado.

The publication of Native Bird – launching in Palmerston North this Thursday evening as part of the three-poet Hoopla series – marks a milestone for him as a more consciously New Zealand-based writer. It is his fifth book, and third poetry collection, but the first published here. His others were published in the US and the UK.

Lyrical, fragmentary, discursive – as a poet, he is committed to experimenting with language and its meanings, with its complexity and nuances. With “found language” from bird reference books, travel guides, sign posts and Wikipedia, as well as distinctions between birdcalls and songs that implicitly parallel that between prose poems and poetry, the collection grew this emerging theme that he turned into art.

Though the details in Native Bird are not to be taken strictly biographically, they trace and explore the emotions, geographies and impressions of his life as a migrant, including the births of his two children in New Zealand (his own “native birds” to whom the collection is dedicated).

Language itself is a central topic. In Worries about my daughter in a foreign tongue, the prose poem describes a father’s reactions and observations to his child’s adoption of the vernacular. He notes new words and expressions that are both strange and yet familiar; paddock; number eight; flat out; good as gold; right as rain; box of birds.

Dr Walpert says his sense of belonging here has been underpinned by his teaching role at Massey. “What’s nice is that after nearly 11 years, my former [creative writing] students are becoming teachers – and they are sending me students. It’s a whole new development.”

As a creative writing teacher and supervisor for students Masters and doctoral students, he says; “All the stuff I’m engaging with in my own work is also the stuff I’m engaged with as a teacher, and with my students – an interest in found language, in discourse, in structures – in prose versus poetry, in language and how that can affect a poem. All my obsessions in my poetry are my obsessions in my teaching and they play on each other.”

He describes Native Bird as; “a very personal book and it mattered to me that it be published in New Zealand for New Zealand readers”.

Wellington-based Mākaro Press founder and editor Mary McCallum – herself a Montana New Zealand Book Award winner – discovered Dr Walpert’s poetry when she was a creative writing tutor at Massey University – something she did for eight years until 2014.

“I attended a reading Bryan gave of his collection Etymology at one of the Massey Writers Read events – and I was blown away by the way he addresses the emotional through the intellectual, pursuing language – playing with it, interrogating it – at the same time as he uses it to understand and rein in feelings and personal events,” she says. “Every word, every comma, every line-break is a conscious decision – nothing is left to chance. As a reader you feel in very good hands, and excited by the potential for language in all its permutations, as well as moved by the world Bryan puts before you.”

She has followed his writing with interest, but feels that “he hasn't had the recognition he deserves in this country because he often publishes overseas”.

As the owner of niche publisher of New Zealand poetry series Hoopla, she read his manuscript and wanted to include it in the annual series of three poetry volumes. The other two are Mr Clean & The Junkie, by Jennifer Compton (formerly a writer in residence at Massey), and Bones in the Octagon, by Dunedin poet Carolyn McCurdie.

Book launches featuring all three poets in the Hoopla series 2015 are: