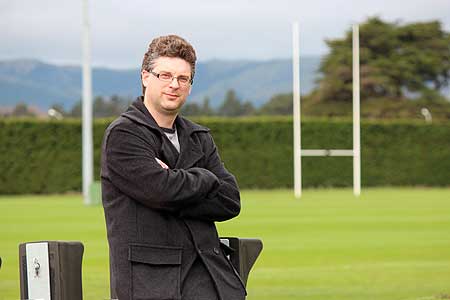 Sport, especially rugby, is often credited by historians with playing an important role in the emergence of a distinct New Zealand national identity, but the relationship between the two is more complex.

When Harry Kerr won New Zealand’s first Olympic medal, a bronze for the 3500 metre walk at the 1908 games, he was not competing as part of a New Zealand team but as a member of ‘Australasia’, a team comprised of 27 Australians and three New Zealanders.

The Australasian team came about because a Trans-Tasman organisation, the Amateur Athletic Union of Australasia, then administered athletics in both countries. The London Games occurred shortly after a transitional phase in New Zealand’s identity, the transition from colony to dominion, formally proclaimed on 26 September 1907. At a practical level, this did not mean much because New Zealand was already effectively self-governing and had been for at least thirty years, but its advocates believed it would lead to New Zealand being held in higher esteem in the world.

By the time seven athletes and two managers represented New Zealand at the London Games in 1948, New Zealand was competing under its own flag, and had done so since 1920. New Zealand, however, remained closely affiliated to Britain.

Although the games occurred eight months after New Zealand adopted the Statute of Westminster in November 1947, thereby becoming fully independent, newspapers still referred to the team as representing the ‘Dominion’. Historian Joseph Romanos points out the ‘Australasian’ identity briefly reappeared during the games. Swimmer Ngaire Lane (now Ngaire Holloway and as the only surviving member of New Zealand’s 1948 team, she recently wished the 2012 swimming team good luck for the games) won a medal as part of an impromptu Australasian freestyle team which finished third at a Federation Internationale de Natation (FINA) organised event.

During the games it was announced that New Zealand would host the Empire Games in 1950. The event was an unashamed celebration of Empire. Athletes recited the Empire Games oath declaring “we are all loyal subjects of His Majesty the King”.

Interestingly, the New Zealand teams 2012 uniforms are purportedly ‘inspired’ by the uniforms of the 1948 team, despite critics of the day finding them anything but inspirational. Indeed Margaret Pearson, writing in the Auckland Weekly News, asserted the New Zealanders “looked the only really dowdy team on the field” at the opening ceremony and decried the “uninspired black and white blazers” which “seemed to be cut on 1910 lines, and had none of the trim zip of the blazers worn by every other nation”.

Unlike their predecessors, New Zealand’s recent Olympic and Commonwealth campaigns portray a strong New Zealand identity. The 2010 Commonwealth Games evoked Sir Edmund Hillary’s memory by drawing on his phrase “it’s not the mountain we conquer but ourselves”. The promotional campaign for New Zealand’s 185 strong team to the 2012 games is also unashamedly nationalistic.

The effect is to reinforce sports role in  promoting a pan-ethnic national identity. The text underlying the advertisements asserts that Olympic achievements are “a proud moment for the whole of New Zealand”.

For all the changes in New Zealand’s evolving identity, however, one factor has remained constant in all campaigns: the belief, expressed in NZOC’s website, that New Zealand is “the small guy taking on the rest of the world”. Given a choice, it seems, New Zealanders will always assert their status as the underdog.