Despite being one of our most successful foreign and war correspondents, Diana Goodman is far from a household name in New Zealand. But she is finally set to get the recognition she deserves.

Massey University presented Dr Goodman with an honorary doctorate at its Wellington graduation ceremony this afternoon in recognition of her achievements as a reporter and as a trailblazer for women in the world of journalism.

Her achievements include being the BBC’s first female foreign correspondent, the first woman to run one of the BBC’s foreign bureaux and the first mother to be sent on an overseas posting. During her foreign postings she covered nearly two decades of historic change – including conflicts in Lebanon, Libya and Romania, the reunification of Germany, post-Communist Eastern Europe and the dissolution of the Soviet Union.

“I’m enormously chuffed, as they would say in Britain,” she says. “It is wonderful to get the recognition because people are not always interested in hearing about what you have done in your life before.” Dr Diana Goodman in her Auckland apartment; a piece of the Berlin Wall sits on the bookshelf.

She graduated from the Wellington Polytechnic journalism programme, which is now part of Massey University’s School of Communication, Journalism and Marketing, in 1970. She remembers those days “very, very fondly”.

Dr Goodman says her early training provided a solid foundation for her future career. “One of the things I learned there was the need to really listen to what an interviewee was saying and respond to that, rather than just going onto the next question.

“Listening is such an important part of our job and picking up the lead that the interviewee has left dangling will often produce a much more revealing reply – even when you're broadcasting against the clock.”

After journalistic roles in New Zealand and then provincial Britain, Dr Goodman landed a job in BBC Radio’s network reporters’ pool. “There were 20-plus men and me,” she says, “and to say they were unsupportive would be an understatement.” 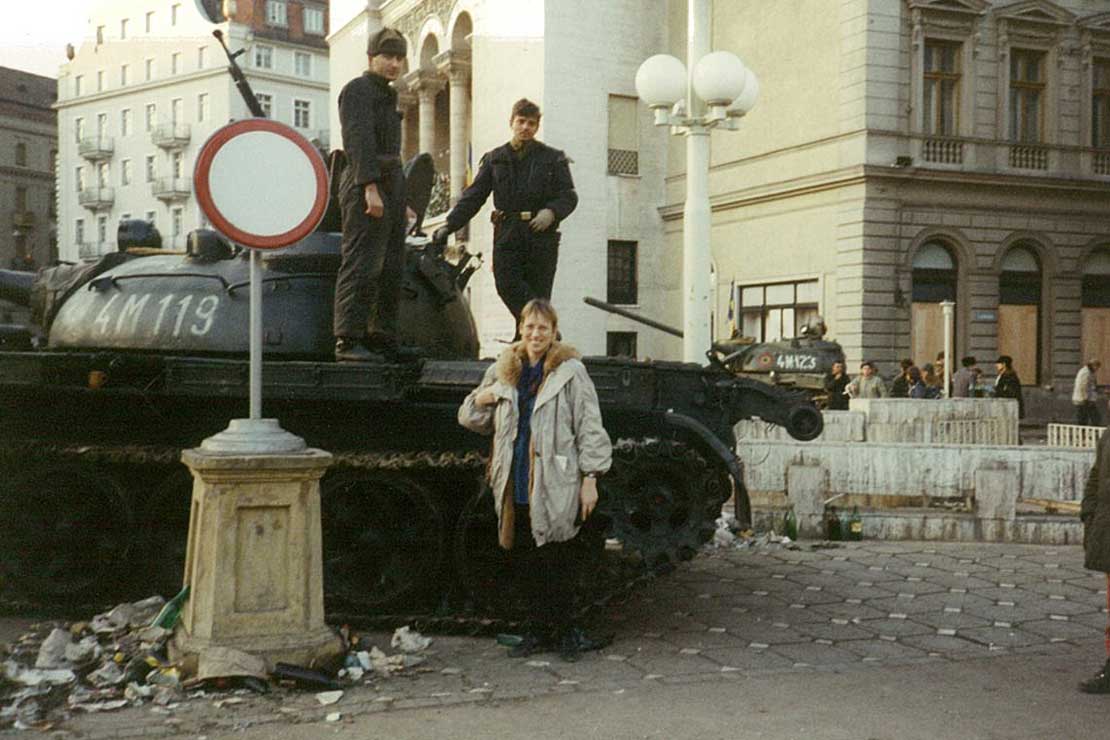 Dr Diana Goodman in Timisoara, Romania during the Romanian revolution.

Dr Goodman says she was continually told women weren’t up to the job of hard news reporting because they were not pushy enough or strong enough, and would likely cry if they had to report a difficult story. Later, when she was controversially sent to Beirut to cover the civil war there, the letters of complaint came streaming in.

“All the same old myths were trotted out. They thought that if I got myself into a dangerous situation all the men would feel obliged to rescue me. It’s ludicrous when you think about it now.”

It seems particularly ludicrous when you hear Dr Goodman describe one of the stories she is most proud of – reporting from Timisoara, the city where the Romanian revolution started.

“When I reached Timisoara I argued my way through a series of armed checkpoints until I could finally go no further. A big, bearded revolutionary agreed to take me into the centre of the city by foot and we quickly came across a crowd of furious, and frightened, local citizens who were arguing about whether to lynch a Securitate [secret police] sniper holed up under a bridge.

“Other snipers nearby started firing directly into the crowd, which caused utter mayhem, but I managed to keep my tape machine running and record the uproar and the sound of bullets ricocheting around. That story was important to me because I was in the middle of a rapidly unfolding revolution and I was able to give BBC listeners a tangible sense of what the Romanians were going through.”

Dr Goodman says she had to fight “really, really hard” for her first foreign posting and that she was very conscious of the fact she had the future of other women’s careers riding on her shoulders.

“There was this huge, extra level of responsibility. I thought, if I muck this up, given there was this propensity to believe women weren’t up to it, it would make it really hard for any women coming after me. I had to get it right, I had to work even harder and get it more right, otherwise I might ruin it for them.”

In an inspiring speech to graduates, she urged them to “retain a moral compass and a strong interest in humanity”, a message she will be repeating as the keynote speaker at the 50th anniversary celebrations of the Massey University journalism programme in November.