A blind student travels the city streets with her instructor 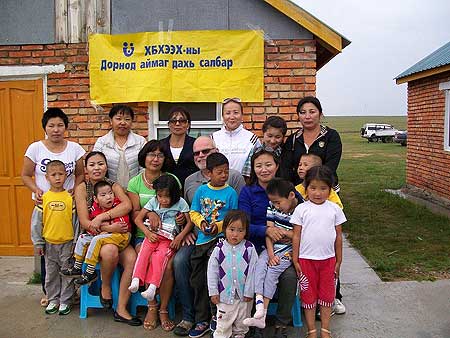 Professor LaGrow with visually impaired children and their parents at a summer camp.
The children received orientation and mobility training for the first time

Blind people in Mongolia are making amazing gains after learning mobility skills from instructors trained by a Massey University professor.

Prior to that the country had no mobility training programme and blind people had very limited opportunities.

A year on, Professor LaGrow, who is based at Massey’s Manawatū campus, returned to Mongolia to see how the instructors were doing. The instructors have now taught up to 50 blind people how to use white canes and adaptive skills to move safely within communities and cities. Each person receives at least 60 hours of instruction.

Professor LaGrow, who has more than 35 years experience in rehabilitation of blind people and those with low vision, spent a fortnight in Mongolia travelling between the capital Ulaanbaatar and regional cities to visit each instructor.

He worked with each to improve their teaching, and talk through any problems they may have experienced, and met the students whose lives they had helped change. “The gains they have made in these people’s lives are just amazing. They have gone from nothing to something.” he says.

“For example, there was one woman we met who was 28 years old, had been blind since birth, lived in a nomadic herding family, and had never in her life set foot outside the ger (family home) she lived in without being on someone’s arm.

“When I got there she had had two weeks of instruction – out of four weeks, which is the standard level instruction they are giving – and she now had the ability to travel about four blocks, crossing streets and keeping track of her location. She just couldn’t get the grin off her face, she was just so delighted.

“She has moved out of her family’s ger and into the city, where she is taking a course to become a massage therapist.

“And everybody I met, it was the same, they couldn’t say enough about what had happened in their life, since they’ve started this instruction. It’s something we take for granted here [in New Zealand], but in Mongolia they had nothing, blind people were completely reliant on sighted people to get around, now those who have received instruction can begin to lead independent lives.”