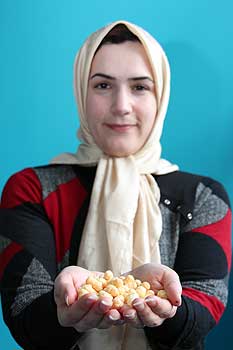 Watch the One News story here.
Processed snack foods are not usually known for their health benefits, but a Massey University PhD student has devised a snack that not only tastes good, it is healthy too.

Zeinab Dehghan-Shoar, of the Institute of Food, Nutrition and Human Health, has found that adding tomato skin to extruded maize snacks not only adds natural red colour but the extrusion cooking process unlocks the lycopene, making it more easily digestible. Lycopene is pigment from the carotenoid family that has high antioxidant properties and it has been suggested that it could prevent certain cancers.

“It is always better to prevent a disease than treat it,” she says. “I enjoyed these types of snacks when I was young and see children enjoying them now, but I realised they were energy-dense and the colours in them were not natural. So I wanted to improve their nutritional value and develop a natural colour for them.”

Ms Dehghan-Shoar used the extruder at Massey’s Food Pilot Plant to add the tomato skins to the base mix of maize grits. Extruders are used to make a range of food products, from cheese snacks and crackers to dry cat food. Raw ingredients are added to the extruder that cooks and shapes the food in seconds.

Different vegetables were considered for colour and health benefits, including purple cabbage. “But I thought tomato skin, because of its fibre content and the red pigment it has, would work,” she says.

Not only did the natural tomato colour survive the harsh extrusion process, the lycopene was actually made more easily digestible. “Our experiments show it can be absorbed more easily from the extruded snacks compared to the raw tomato,” she says. “Processing it a little bit breaks down the cells to release the pigment, making it easier for the body to use.”

The snack is also high in fibre, adding to its nutritional value, and most importantly tastes good. “We carried out a sensory trial on the tomato-based snacks, and tasters rated them highly.”

The tomato skins are a waste product as they are usually discarded by the food industry, so the snacks were not only healthy but also low-cost.

Ms Dehghan-Shoar says her research shows the process is a successful way to protect the antioxidant until it is eaten. Under the supervision of Allan Hardacre and Dr Gordon Reynolds, more than six scientific articles have been published or are in the process of publication from her research in internationally known peer-reviewed journals. She says further research using pumpkin and carrots could determine whether other beneficial antioxidants, especially B-carotene, the precursor of Vitamin A, could be delivered by these snack foods.

Good under pressure
Food tech students serve up a treat
Food Nutrition lab under construction
How can New Zealand move up the value curve?