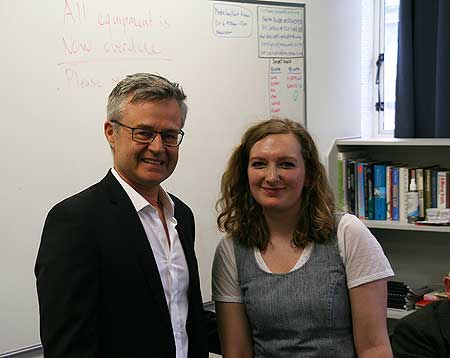 Dominion Post editor Eric Janssen presented the Alex Veysey Memorial Prize to Hawke’s Bay-born student Adam Pearse. The prize is named in honour of the late but legendary Wellington journalist and awarded to a student who epitomises Mr Veysey’s hard-working professionalism, love of life and journalistic values. The Dominion Post sponsors the $500 award.

For the second year running, the Insurance Council funded a prize for the best business writing. Insurance Council chief executive Tim Grafton explained that the $750 prize, awarded to student Reweti Kohere, was created to promote better public understanding of insurance and business.

A long-standing award for best sports journalism, the Brian F O’Brien Memorial Prize, was awarded to Nicholas Pointon for a strong portfolio of stories particularly focused on the athletics community. The award of $1000 is funded, and was presented, by Dennis O’Brien as a tribute to his late father who produced, edited and published the Sports Digest.

An award presented in the category of best special topic in which students were encouraged to write about any issue of interest to them was won by Ellen O’Dwyer-Cunliffe for an investigative piece about the trialling of an alcohol and other drug treatment court at two Auckland locations to help those who commit crimes due to drug abuse.

Associate Professor Grant Hannis of the Massey University journalism programme says at a time of continued pressure on the media sector, it was gratifying that businesses continued to show their support of the journalism industry by sponsoring such awards.