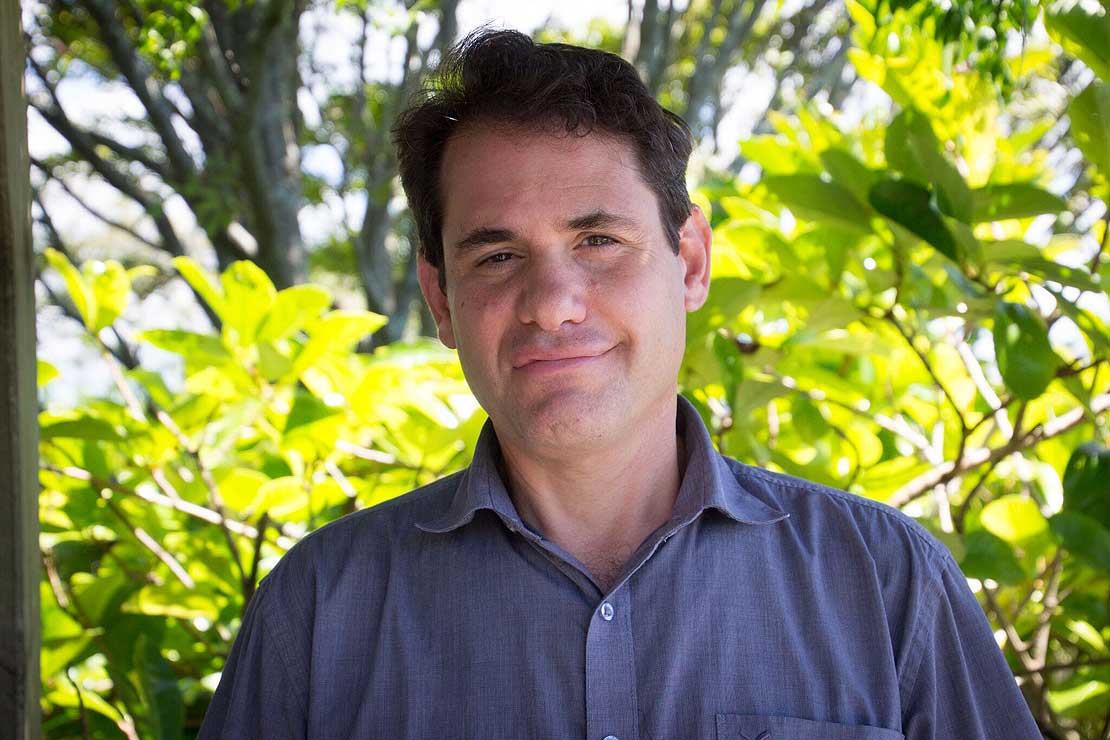 Associate Professor Bryan Walpert, poet and author of a new book on the links between poetry and mindfulness 
Could poetry save our psyches from imploding under the ceaseless interjections of cell phone pings, tweets, texts, and social media updates? Is it time to champion the inherent value of reading and writing poetry: a simple path to heightened awareness – of detail, nuance, the present, the beauty all around us?

In this respect, mindfulness – a Buddhism-inspired form of meditation that has soared in popularity in recent years – shares common ground with poetry, says Bryan Walpert, on the theme of his new book. Both offer ways to help us be calmer, more focused and in the moment amid endless digital distractions and neural overload.

Dr Walpert, an award-winning poet and associate professor in the School of English and Media Studies at Massey University’s Auckland campus, has been named finalist in the Ashton Wylie Charitable Trust Mind Body Spirit Literary Awards for his book, Poetry and Mindfulness: Interruption to a Journey(Palgrave Macmillan). The winner, who takes home a $10,000 prize, will be announced on August 17.

His message is that reading and writing poetry are literary – and literally – antidotes to the multimedia “mindlessness” that pervades modern life and threatens to erode core human capacities, such as the ability to notice what’s around us, to empathise, to pause and reflect for a minute.

“Studying poetry – as a reader or writer – is, like mindfulness, a means of developing certain mental muscles. Poetry requires on several different levels the kind of attention the mindless trends in our society discourage. What I argue in this book is that the study of poetry is beneficial for the way poetry invites us to engage with it, not because poets themselves are particularly wise,” he says.

“It is now not just run-of-the-mill but essentially expected to sit at a restaurant with one friend while communicating by text to another, to have virtual meetings from trains and airports. Even sitting at our desks, in our homes, we juggle tasks with several applications open on our screens and multiple enticements for our attention on nearly every web page,” Dr Walpert writes.

“Thanks to Facebook, Instagram, Twitter, and the like, we are bombarded, too, with messages that are difficult to see through or past, messages about what matters – about our bodies, about purchasing, about the political views we should hold, about the desires we did not even know we had, but which now appear desperately unmet.”

While he acknowledges that there are many advantages to these technologies, he says scientific research suggests that one great disadvantage is the development of distractibility and mindlessness.

“Worse, evidence suggests that using the internet – with its hypertext structure, its many applications for distraction – is actually changing the structure of our brains, with some troubling potential ramifications for empathy and the sort of critical thinking we in the humanities offer.”

In this context, the proliferation of mindfulness groups, apps, books, retreats, online and workplace programmes “is a rich opportunity to suggest the broader value of studying poetry because these two practices have quite a bit in common,” he says.

Poetry, says Dr Walpert, “can even help us to think ecologically at a time when we most desperately need to think in systems, but instead are encouraged to think in bits and bytes,” he writes. And in this sense, his book is a broader defence for humanities education, shining a light on its unsung practical uses.

“The humanities are increasingly pressured to show their utility, as university education in this country and elsewhere is increasingly valued for its vocational results,” he says. “I argue that poetry offers a fundamental training in thinking ecologically, regardless of the thematic thrust of the poem – it needn’t be “about” the environment. We sell ourselves short if we fail to note that the training students receive in a poetry classroom, as reader or writer, helps them to develop a ‘systems’ approach to analysis and creativity. “

By ‘systems approach’ he means “thinking about how a change in one area affects another area, possibly quite distant”. Climate change is one example.

“We need to realise that what we call the ‘environment’ is an interdependent system. That is true, as well, of economic decisions. Replacing a cell phone each year in Auckland has both environmental and health ramifications in other parts of the world – such as waste disposal, in some cases polluting natural areas and leading to illness because materials in phones are toxic, plus the extra mining required for the elements necessary for cell phones to function, and the energy used to manufacture so many new phones.” It's an issue he says is explored in more depth by those in the field of 'media ecology', such as his colleague Dr Sy Taffel, who is co-director of the Massey University Political Ecology Research Centre.

He says that studying poetry teaches us to think in systems. “One reason is that a poem is a system and that a word in line seven will often have echoes in lines 12 and 18, which in turn will contribute to a web of meanings. But studying poetry also eventually requires putting not just words or lines into the system of the poem but putting the poem itself into a series of overlapping contexts – historical, cultural, economic, linguistics – that are in fact systems.”

And such training can be relevant and transferable to other areas of life, he believes.

Personal development and a greater level of wellbeing is another benefit, as some students have shared. He tells of one in his advanced poetry class who, after studying the ode, wrote to thank him “for having opened my eyes to the beauty inherent in everyday things around me ... which is a precious gift."

“I wish I could take credit for that. It was close attention to poetry that offered her those rewards. We in many ways need the societal emphasis on mindfulness to help awaken students and others to the beauty of poetry,” Dr Walpert says.

Although he admits he’s inconsistent in his own mindfulness practice, mindfulness has been fundamental for his writing life. He first made the connection between writing and meditation more than two decades ago when he was living in the United States. His experiences prompted him to leave his journalism job, where he was increasingly dissatisfied, for the practice and the formal study of poetry in graduate school.

Poetry and mindfulness “have been intertwined from the beginning for me, and this book has therefore for me both professional and personal significance”.

Mindfulness shown to improve health outcomes for wāhine Māori
Local ties to nature revealed in ecopoetry PhD
Music discovery leads to a winning novella
Are mindfulness apps worth your attention?

Mindfulness for changing times
Can poetry save the Earth?
When poetry meets science