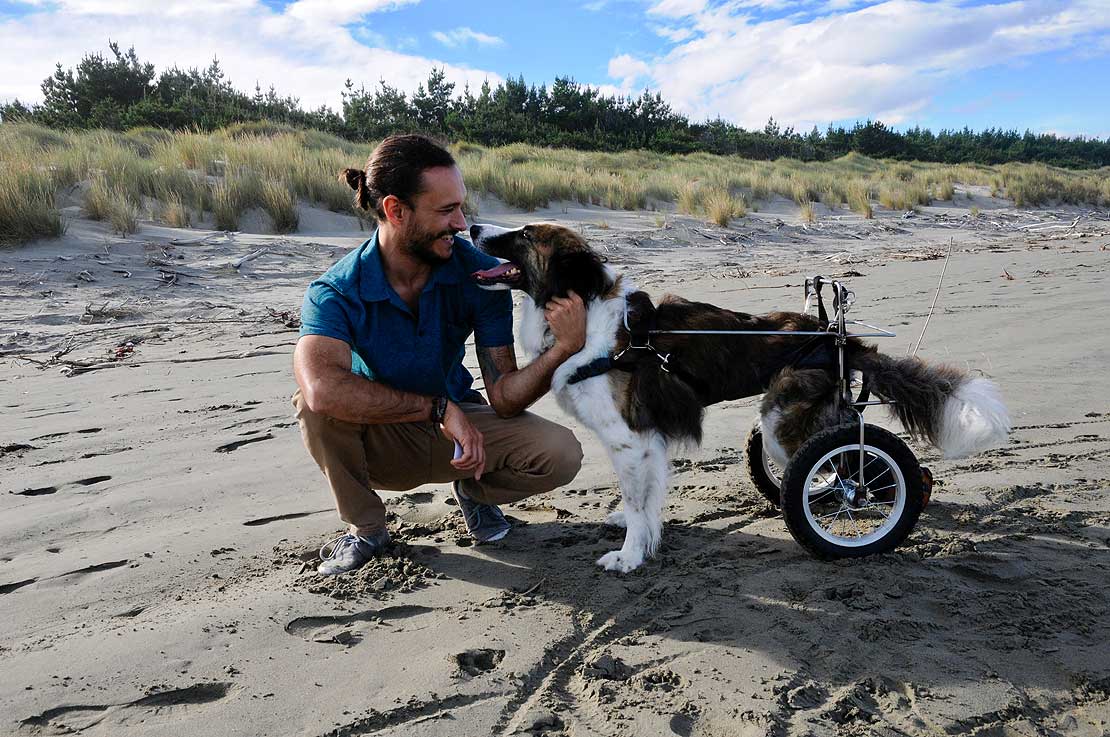 A love of surfing and passion for environmental studies, protecting coastlines, and learning about disaster recovery prompted Martín García Cartegena to leave Uruguay for Aotearoa, where he’s conducted doctoral research on post-quake community resilience since 2016.

Dr García Cartagena graduated this week with a PhD in Resource and Environmental Planning for his thesis titled: Community Resilience, Capitals, and Power Relations: Stories from the Waimakariri District about the aftermath of the 2010-2011 Canterbury Earthquakes in New Zealand. With this week’s graduation ceremonies in Palmerston North cancelled due to the COVID-19 pandemic lockdown, he found an alternative way to celebrate.

“I actually celebrated passing my PhD oral examination before lockdown came into effect. I celebrated by going for a surf and taking my dog for a walk on the black sands of Kumara Patch in Taranaki. Later that day we got together with friends and enjoyed a lovely meal. It was a very happy day, and a great way to celebrate.”

Dr García Cartegena completed an undergraduate degree in International Relations at the Universidad de la Republica, Uruguay. With a deep interest in environmental studies, he joined an interdisciplinary research centre to study climate change and its implications for Uruguay, where he completed a master’s degree on Integrated Coastal Zone Management. Then he got in touch with Professor Bruce Glavovic, an international expert on coastal management and disaster research based in the School of People, Environment and Planning in Manawatū, and  moved here in 2015 to do an internship. He began his doctoral research the following year on the Waimakariri district, which was affected by the red-zoning process that unfolded after the 2011 Canterbury quakes.

Using the Community Resilience Capital Framework as the basis for his research, he explored the “underlying power dynamics that underpin the evolving and always changing field of community resilience.”

His study encompassed a broad view of what community resilience means, to include a range of ‘capitals’ (meaning ‘assets’ or ‘resources’) such as cultural, symbolic, political, and moral as well as human, natural and economic.

“After the earthquakes, the Waimakariri District Council designed and implemented what was called an Integrated Community Based Recovery Framework,” he explains.

“Based on strong political, social, and moral capital foundations – such as inter-institutional communication, participation, local knowledge, and social justice – the approach enabled further development of diverse initiatives including artistic community interventions in the urban environment and communal food forests, amongst others.”

Yet, interests responding to broader economic and political processes, such as continuous central government interventions, insurance and reinsurance processes, paradoxically contributed to the erosion of human capital.” This effect, he found, resulted in “increased rates of suicide, and family violence, as well as increased levels of stress across the community. Ultimately, and despite central government, local council, and community efforts, these broader processes hindered community well-being in the long-term.”

He hopes his research will help to inform the importance of long-term, holistic planning for community recovery in the aftermath of a natural disaster for the re-building and balancing of social, environmental and civic well-being.

Since he left Uruguay, his beloved border collie Chicha, has been his constant companion. She has won hearts and headlines in New Zealand. Getting permission to bring her into the country was a huge mission, involving a year and a half of planning, paperwork, national and international lab tests.

“My dog, Chicha, is quite special,” he says. “She has a paralysis of her back legs due to a car accident seven years ago, and I brought her with me to New Zealand. She always travels with me – I've taken her all through the North and South Islands. With her little cart she can get through rough terrain and seeing her enjoy some of the most amazing and breath-taking environments with me has been amazing. Everywhere we go people have received us with open arms and hearts. People always relate to her condition, take interest, and give words of encouragement. We are both very lucky to be here. “

Chicha has even entered the education system and made it into the local newspaper when she visited a small school in Uruti, Taranaki. A kennel owner who looked after her for a month when Dr García Cartegena was out of the country thought children could learn about diversity from the “dog with wheels.”

Dr García Cartagena rescued Chicha when she was a starving puppy on the streets of Punta del Este in Uruguay, and nursed her back from the brink of death. When he moved to busy La Paloma on the coast, she was hit by a truck. Despite her broken back and grim prognosis, Dr Garcia Cartagena took her to Uruguay’s only canine veterinary neurosurgeon. Spinal surgery, a special canine wheelchair and a long recovery with 24/7 nursing and support from friends have meant she now enjoys a good life.

His thesis acknowledgements (thanking numerous friends, family, colleagues and supporters) conclude with a touching tribute. “I would like to express my eternal debt of gratitude to Chicha. I would not be who I am, I would not be where I am, and I would have definitely not have completed this PhD if it wasn’t for her and her way of teaching me on a daily basis that everything and anything is possible with love, commitment, and hard work.”

As well as writing a book in his spare time about his life with Chicha, Dr García Cartagena is currently helping deliver a course, via online lectures, into the Bachelor of Resource and Environmental Planning in the School of People, Environment and Planning at Massey’s Manawatū campus, on building natural-hazard resilient communities. He is about to take up a post-doctoral position until the end of 2021, which includes both lecturing and research activities.