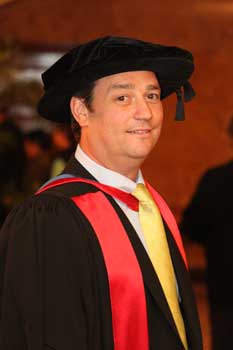 He started out with a teaching degree then switched to geology and the study of volcanoes, now Jonathan Procter (Muaupoko, Ngäi Tahu), is one of a very few Mäori with a PhD in earth science.

Dr Procter returned to Palmerston North this week just in time to graduate with his PhD after attending the European Geosciences Union conference in Austria, where he presented research developed as part of his doctoral thesis on volcanic mass flow hazard assessment.

He is a researcher in the University’s Volcanic Risk Solutions team based at the Manawatu campus and is credited with organising the University’s 20-member team to be quickly on site when the March 18 2007 lahar (volcanic mudflow) at Ruapehu was in motion. “I was there; I helped organise some of the monitoring stations and people on the day to go out and get data from the actual flow,” he says.  “Seeing a big lahar like that was pretty cool. It’s powerful being beside it, seeing the effects of it – the destruction and noise. My favourite thing [about volcanoes] is watching them explode.”

As a result of data collected at that time he has tested a new simulation model incorporating geological mapping, to provide new insights into the flow and deposition of large-scale avalanches. Dr Procter says this will enable forecasting of a range of small-scale hot and cold mass flows expected from any reawakening of Mt Taranaki and further activity at Ruapehu.  His research culminated in the production of new electronic dynamic hazard maps that can be used for land-use planners and emergency managers.

Raised in Levin, Dr Procter attended Horowhenua College. He came to Massey thinking he would like to be a teacher, graduating with a Diploma of Teaching and Bachelor of Education in 1998. “I started off as a teacher and didn’t like that, so I came back to Massey and did geology.” He completed a Bachelor of Science majoring in earth science then a master’s. For his doctorate, he decided to specialise in volcanoes. “It’s more exciting to see volcanoes erupting than rocks just sitting there.”

A big part of Dr Procter’s work includes developing applications and equipment to monitor volcanic activity in New Zealand and active volcanoes in Vanuatu. The team also travelled to Indonesia in February to test a new iPhone data application. “The test went well, and we are still in the process of analysing and comparing the data we collected.” He says that despite seeing a couple of small lahars, only one produced a good signal. “We still have a lot of testing to do. We will be testing some new river monitoring equipment and will try to include the iPhone application in that.”

His current projects include installing new flood monitoring tools on some rivers in New Zealand and developing a stationary GPS, seismic and gas monitoring system on the active volcano Ambrym in Vanuatu. “I am also trying to develop a project incorporating mätauranga Mäori into modern day volcanic monitoring systems and hazard identification.” He has always maintained his connection with his ancestral marae in Levin, Kohuturoa, where like his grandfather, Bill, and father, Noel, he has been involved in the committee and with local land issues and was recently elected as chair of the Lake Horowhenua Trust.

Dr Procter is involved in a number of projects surrounding Mäori environmental concepts and environmental management particularly around the Manawatu River, and is assisting Rangitaane o Manawatu with their Treaty of Waitangi claim, providing research support and environmental geographic information systems advice.

Dr Procter and seven other Mäori PhDs will join with 54 of their peers at the special ceremony to honour Mäori academic achievement on Friday morning at the Regent Theatre.
By the end of the week 146 Mäori will have graduated from the Manawatu campus, about 25 per cent with postgraduate qualifications.

The Wellington campus ceremony to honour Mäori graduates will be held on May 28 at Te Kuratini Marae, at the conclusion of that ceremony more than 380 Mäori will have graduated from the University’s three campuses.

Do what you enjoy and you will succeed, business graduates told
Student defies odds to graduate
Aviation management in her sights
Science graduates urged to make a difference