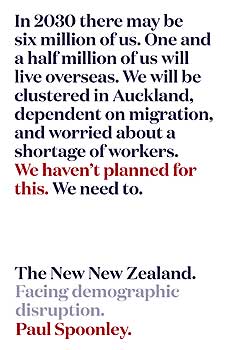 One of Professor Spoonley's books


How racist are we? What’s driving changes to the way we work, live and have families? What does it mean to grow old in 21st century Aotearoa? Just a few of the big issues that sociologist Paul Spoonley has studied, taught, written about, and debated.

The Massey University Distinguished Professor Emeritus is as close to being a household name as a sociologist could hope to be, thanks to his media profile and commitment to being a public intellectual. From falling fertility rates and the rising ‘silver tsunami’ to immigration, racism, right-wing extremism, the mindset of Millennials – he’s been at the forefront of exploring numerous trends, hot button issues and undercurrents over decades of social change.

Recently retired, the eminent social scientist is far from winding down his 42-year pursuit of probing the dynamics that shape our society and our psyches in a post-colonial era.

“It has been a challenging and rewarding career. Sociologists have been in the box seat when it comes to understanding social behaviour and change. I have been endlessly fascinated at what motivates people to think and act in the way that that they do," he says. "And I hope that sociology, and what we have done, has added to debate and public/policy understanding.”

He started teaching in the 1980s – a decade of major change and social upheaval. “Sociology came into its own with everything from the 1981 Springbok Tour to the 1984 to 1989 Labour government. It was a great time to be a sociologist and it was made richer because of the students we had,” he says.

Many of the seismic changes that have affected us all – from the rise of feminism in the 1970s and the emergence of tangata whenua aspirations for political, cultural and language recognition – have been captured in his books. He’s written or edited 28, including Mata Toa: the Life and Times of Ranginui Walker (Penguin, 2009), a biography of the prominent Māori academic and the book he is most proud of.

In the wake of the 2019 mosque attack in Christchurch by a lone gunman, Professor Spoonley has been a sought-after media commentator and policy advisor on understanding white supremacy. He first explored the subject in his PhD during the mid-80s, establishing the nature and extent of the Far Right in New Zealand following his master’s degree (Bristol University) on the National Front in the United Kingdom.

“I knew that there were Far Right groups in New Zealand and yet everybody denied it at the time,” he says.

His book, The Politics of Nostalgia: Racism and the Extreme Right in New Zealand, was based on his PhD in 1987 and he plans to return to and update it this year. “We seem to have ignored some of those lessons and we’ve had to re-learn them after March 15, 2019.”

Immigration – how it transformed this country

The topic he is most widely asked to comment on is immigration, and the resulting population diversity. The son of a migrant father from Liverpool, he developed an early interest in migration. His master’s (at Otago University) in the mid-1970s was on Niuean migration to Auckland. He was the first to tag Auckland as ‘superdiverse’ in 2008 thanks to statistics that revealed Aotearoa’s largest city is among the world’s most cosmopolitan just behind Toronto, with around 40 per cent of its 1.63 million citizens born overseas.

He’s keen for this generation of policy makers to be more proactive in responding to the demographic challenges such as the ageing population, dropping fertility, regional divergence and immigration – issues he’s canvassed in his latest book: The New New Zealand: Facing Demographic Disruption (Massey University Press, 2020, 2nd Edition, 2021).

“We need to be asking – ‘what is it we want?’ for this country - and therefore to decide migration flows or to do more for regional population and development.”

Professor Spoonley is strong believer in the importance of intellectual leadership in generating informed debate of ideas and controversial issues, despite having regularly been threatened and verbally attacked for doing so. “Being a public intellectual – though an uncomfortable space at times – is a role we [academics] should embrace,” he says.

He believes the Bachelor of Arts and the transferable skills it fosters has become more relevant, given the major social changes that have occurred. “Problem solving, literacy – whether cultural, numerical or linguistic – are all vital for being able to work and thrive in a contemporary society,” says the former Pro Vice-Chancellor of the College of Humanities and Social Sciences.

“Both the remake of the Massey Bachelor of Arts (BA) in 2014 [with the creation of core papers on citizenship and identity] and investing more in online learning has anticipated what COVID-19 has thrust upon us. But it is also how contemporary university teaching should be.”

His many accolades and appointments include being named a Fellow of the Royal Society of New Zealand - Te Apārangi and being awarded the society’s Science and Technology medal in 2009 in recognition of his academic scholarship, leadership and public contribution to cultural understanding. He was made a Fulbright Senior Scholar at the University of California, Berkeley in 2010, and in 2013, a Senior Visiting Fellow at the Max Planck Institute of Religious and Ethnic Diversity in Göttingen, Germany. Since 2018 he has been co-chair of Metropolis International, the world’s foremost network of researchers, government officials, international organisations and civil society groups concerned with migration and diversity.

His contribution to sociology was acknowledged with the Sociological Association of Aotearoa New Zealand Scholarship for Exceptional Service to New Zealand Sociology in 2011, and he was made a fellow of the Auckland War Memorial Museum Tāmaki Paenga Hira in 2015. Not bad for the kid who was told that he “was not suitable university material” as he left Hastings Boys High School.

At Massey he is an Honorary Research Associate and continues as a frequent media commentator and public speaker, as well as working on new writing projects and policy appointments, including a new Human Rights Commission project on a national action plan against racism as well as being part of an oversight group for a research project on the New Zealand Police, and a role with Koi Tū: The Centre for Informed Futures.

Beyond relentless media requests to shed light on one issue or another, Professor Spoonley has fresh interests to pursue. He recently bought a fishing kayak, and he wants to write a book on heavy horses. Although he doesn’t own any, he’s always had a fondness for Clydesdales and Shire horses since growing up on a Hawke’s Bay farm.

He plans to spend more time on the Hawke’s Bay orchard he runs with his wife Jennifer (an academic at the University of Auckland Medical School). And to read more crime thrillers, his favourite leisure genre and escape from the world of being a demography ‘detective’.