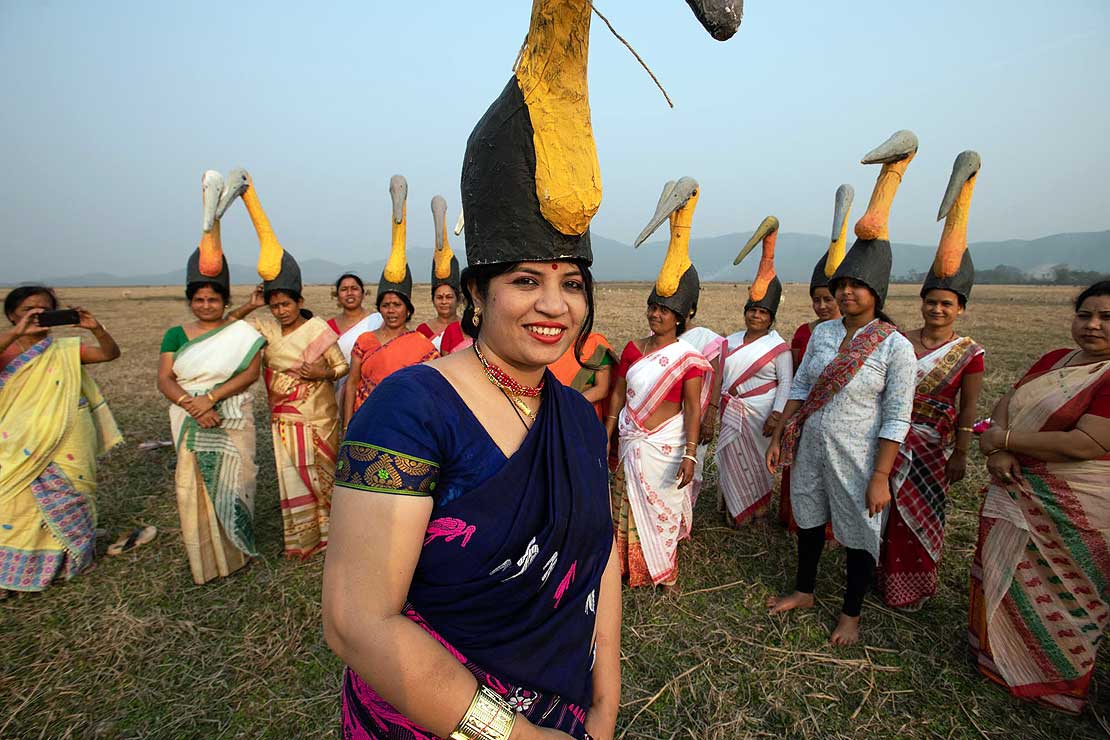 Supporting a rural women’s campaign in India to protect an endangered stork species has been a fascinating departure for Manawatū-based scientist Professor John Cockrem from his usual work studying the habitat and threats to Aotearoa’s native Little Penguin (kororā).

The Greater Adjutant stork (Leptoptilos dubius), locally known as Hargila (the bone swallower), is an endangered bird with an estimated global population of less than 1200. Indian conservation scientist Dr Purnima Barman initiated and sustains a successful and well-known conservation programme in Assam in northeast India to turn around a decline in the population.

The success of the programme is shown by the increase in the number of nesting colonies in the village area of Dadara, Pachariya, and Singimari in Kamrup District in Assam from 28 nests in 2007–08 to 208 nests in the 2019–20 breeding season, making this the largest breeding colony of Greater Adjutant Storks in the world.

As well as travelling to India to support the project and see the birds up close, Professor Cockrem worked with Dr Barman to help with the writing and submission of her first paper in an international academic journal. The paper, titled Saving the Greater Adjutant Stork by Changing Perceptions and Linking to Assamese Traditions, has recently been published in Ethnobiology Letters, a journal of the Society of Ethnobiology. It promotes interdisciplinary study of relationships of plants and animals with human cultures worldwide, including past and present relationships between peoples and the environment.

“The stork paper showcases the value of involving local communities for a win-win conservation approach that ensures both birds and humans survive and thrive alongside each other,” says Professor Cockrem.

The article tells the remarkable and inspiring story of how villagers in Assam, India, changed their perception of the gangly, unattractive storks. Through education programmes aimed at enhancing their role as nature’s protectors, villagers living near the storks switched from resenting the birds for the mess they make to gaining a new, positive understanding of their own and the birds’ place in a broader conservation framework. This coincided with linking economic activities as well as cultural and spiritual events to imagery and symbolism of the stork.

A rural women’s conservation movement, the Hargila Army, is at the heart of the conservation project led by Dr Barman. It was sparked by concerns about habitat loss, poisoning, and poaching that have caused large declines in populations of this stork in South Asia. The Brahmaputra valley in Assam in north-eastern India, where the conservation project unfolded, is now the last stronghold for the species. 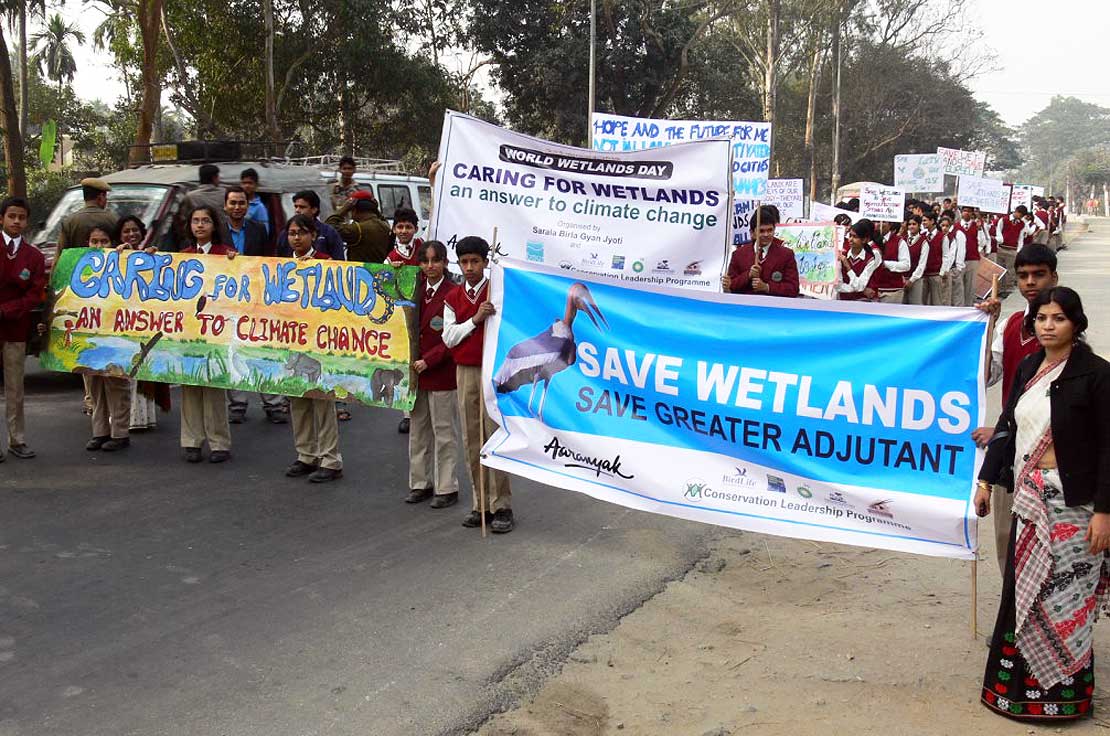 Local schools have also taken part in the conservation campaign to save the endangered stork.

From pests to prized birds

The authors describe how the storks nest in privately-owned trees within thickly populated villages. “Nesting trees could be located very close to houses, with up to 15 nests in one tree. Adult birds bring fish, snakes, waste meat, and bones to their nests to feed the chicks,” they write. “These food items often fall on the ground along with faecal matter of the birds, so the area underneath the nesting sites often has a foul smell. Chicks can fall from the flimsy nests and dead chicks underneath the nests make the area unpleasant. The owners of nest trees often used to disturb the birds to make them leave. Nest-tree owners would also fell the nesting trees to earn extra money to support their families, especially during marriages of their daughters and sons.”

A survey conducted before the conservation campaign indicated that the villagers were not aware of the importance of the endangered stork, which they treated as a bad omen because of its feeding habits. The next step was to generate an “ownership feeling” amongst the villagers for having storks in their villages.

“As a result, 10,000 rural women have pledged to be involved in the Hargila Army and to be voices for unprotected areas. Baby showers for stork chicks were regularly organized to encourage the women. Looms and yarn were distributed and opportunities for the women to enrol in a Diploma in Fashion Technology were provided. These women were engaged in weaving traditional Assamese garments called gamosas, with stork motifs incorporated into the traditional decorations. The Hargila campaign was integrated with the holy book Bhagawat Gita procession, a local festival of the community.”

They emphasise that “the incorporation of the conservation campaign into the villagers’ ritual belief system has played a large part in the effort to protect the species.”

Tree and animal species are symbols of Gods and Goddesses in Indian culture, and mythology and ritual beliefs can be a major tool for enhancing conservation awareness.

In its first 12 years, the conservation programme educated 12,000 school children about nature, bird watching, and other activities – including rescuing chicks that fall from nests – to increase their awareness of the natural environment.

A Professor of Comparative Endocrinology in the School of Veterinary Science, John Cockrem is an ornithologist with experience with a wide range of bird species. He is continuing to support the work of Dr Barman, the recipient of numerous national and international awards for her work, including from the Whitley Fund for Nature in the United Kingdom and a Nari Shakti Purashkar award (India’s highest civilian honour for women). 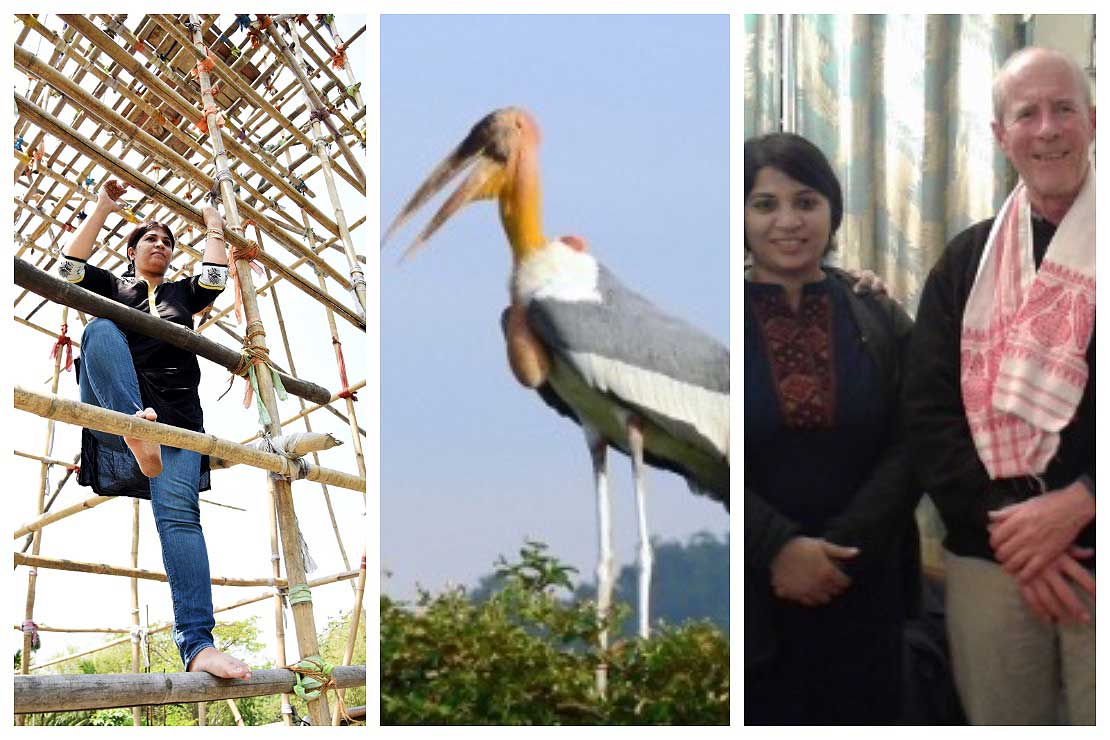