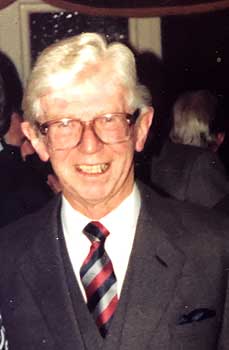 Accountants living all over the world who have been recipients of the Gibson Accountancy Scholarship have expressed thanks to the Gibson family and shared how the support helped them during their time studying at Massey University.

The Massey University Foundation hosted an event this week to mark the 40-year milestone of the scholarship, which was established by Allan Gibson in 1980. Mr Gibson, originally from Blenheim, was a chartered accountant who lived in Palmerston North most of his adult life after studying at Victoria University in Wellington.

He began the scholarship by donating $500 a year in the 1980s. When he passed away in 2005, his bequest to the Massey University Foundation meant the scholarship could continue in perpetuity. It is one of the university’s longest running scholarships.

Mr Gibson’s daughter Penny Brooks and granddaughter Amy O’Brien attended the event and presented a scholarship to one of the successful 2020 recipients – all undergraduate accountancy students with an interest in rural, agriculture, horticulture and agrifood industries.

One of the three recipients this year is Emma Wills, 23, who is studying online, part time towards a Bachelor of Business majoring in Accounting while working full time for Carrfields.

Emma says the support will make a huge difference. “It’s nice to be appreciated for what you are doing and the work you’re putting in as sometimes as a student it can feel like you’re getting nowhere fast. This acknowledgement and support mean a lot.”

As a livestock administrator, she is able to apply the theory that she’s learning to her role.

“I can relate a lot of what I’m learning in textbook form to what I’m actually doing every day and it makes it so much easier to learn new stuff. At the moment I’m learning about provisional tax and terminal tax and I already had an idea of what those things were because I’m able to relate it directly back to what I’m doing each day.”

The other 2020 recipients are Nathan Morgan and Maryam Mahanrad. Each receive $1000 but the amount will increase to $5000 from next year.

Allan Gibson was just 16 when he moved to Wellington to study, which his daughter believes is one of the reasons he chose to support students through this scholarship.

“Accountancy was his passion and he wanted to help. He knew how difficult it can be for students having been one himself at 16 in Wellington.”

The foundation’s Development Manager Kelly Weaver read out some of the past recipients’ stories at the event, including from the inaugural recipient Agnes Taylor. Many were now living and working around the world and others in New Zealand are working for some of the country’s largest and well-known dairy and accounting firms. Penny Brooks says she appreciated hearing from them and will treasure their thank you notes.

“I felt quite emotional listening to all the people he’s helped and hearing their stories. I didn’t realise how long it had gone on. He always liked meeting the recipients, sometimes he took them out for lunch and he’d follow their careers – he was passionate about that.”

The new Allan Gibson Distinguished Auditing Prize, valued at $1000, was also announced at the event, which will be presented to the student with the highest average mark in auditing from 2021.