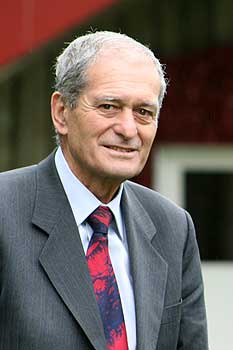 The medal is in recognition of Sir Mason’s outstanding contribution to social sciences in New Zealand and the international acclamation of his work, the society says. It will be awarded for the first time later this year to a social scientist whose work has had an international impact but originated in a New Zealand environment.

Massey University Vice-Chancellor Steve Maharey says Sir Mason is someone who does outstanding work that is firmly rooted in New Zealand but relevant and important to the global community. "The solutions to the problems the world faces almost inevitably have a social dimension – whether we are talking about transport, energy use, climate change or public health," Mr Maharey says.

Sir Mason (Rangitāne, Ngāti Kauwhata, Ngāti Raukawa) is from Feilding. He attended Te Aute College in Hawke's Bay and the University of Otago, graduating in 1963 with a Bachelor of Medicine and a Bachelor of Surgery. He has a Postgraduate Diploma in Psychiatry from McGill University in Canada and was appointed Director of Psychiatry at the Palmerston North Hospital in 1976.

From 1986-88 he was a member of the Royal Commission on Social Policy and, in 1988, was appointed to the chair in Māori Studies at Massey. He is currently Professor of Māori Research as well as Deputy Vice-Chancellor and Assistant Vice-Chancellor (Māori and Pasifika). He is a member of Te Mana Whakahaere (the governing body of Te Wānanga o Raukawa) and chairs Te Kāhui Amokura, Universities New Zealand's Māori committee. He has been a commissioner on the New Zealand Families Commission and led the Guardians Group of Secondary Futures.

Apart from research into health outcomes and practice methodologies he has been closely involved with the ongoing development of health policy in New Zealand and has worked extensively with Māori community health providers. Sir Mason has a special interest in Māori health workforce development and remains actively involved as chair of the Henry Rongomau Bennett Māori Health Leadership Foundation, Te Rau Puāwai, and Te Rau Matatini. He is a member of the Whānau Ora Governance Group, an adviser to Health Workforce New Zealand, and chair of the District Health Board Research Fund Mental Health Committee. He was knighted in 2010 for his services to public health and to Māori health.

The award will be offered annually and applications close on June 30. For more information: http://www.royalsociety.org.nz/programmes/awards/mason-durie-medal/