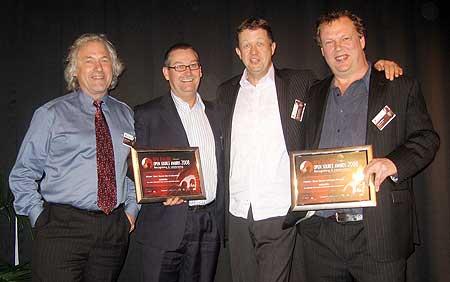 An e-portfolio system developed by a Massey-led research team  has won the education section in the New Zealand Open Source Awards.

A team including Massey staff Associate Professor Mark Brown and Gordon Suddaby, the Auckland University of Technology, the Open Polytechnic, and Victoria University of Wellington developed it.

Dr Brown says the intention was to develop a system to collect digital artefacts and promote critical reflections on them to support self-directed and life-long learning.

“Mahara provides the opportunity for learners to collect, select, reflect, connect and share their goals and accomplishments,” he says. “It helps learners to document their learning journey and showcase their skills and achievements in a rich digital media format.”

“It has been highly successful in developing a community of educators in a short amount of time,” Dr Brown says. “As an open source platform, it will be further developed by that community.”

At Massey, several pilot Mahara e-portfolio projects are under way or planned, working through an externally hosted site MyPortfolio managed by the Flexible Learning Network.

Dr Eva Heinrich is leading the largest initiative in the College of Sciences, which aims to assist students on their path towards becoming life-long and self-directed learners.