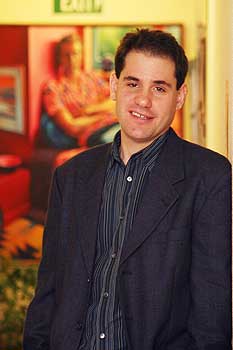 Last week the US-born and educated poet heard his poem “Aubade” had made the longlist of 80 poems from writers in 13 countries. The poems were selected from 2000 entries in 70 countries by the 2013 Montreal International Poetry Prize Editorial Board – an international jury of ten eminent poets.

He is the only New Zealand-based poet to have made either list. The shortlist comprises 50 poems and was announce last night, with the winner to be announced on September 23.

His poem is set in the Manawatü and invokes the presence, sound and movement of the windmills as a backdrop to his central subject, a relationship. It’s the second time he has had a poem in the Longlist; the first was in 2011 for the inaugural Montreal Poetry Prize, held every two years.

Dr Walpert, who teaches at the School of English and Media Studies, says it’s an honour to be chosen for a truly global award. “The Montreal competition has an explicit mission of global outreach for the best poetry written in English from anywhere in the world.”

The competition has a sliding scale of entry fees to ensure economic disparities between nations don’t pose a deterrent to entry.

The title of his poem (one of three he submitted) refers to a dawn poem, traditionally about lovers parting at dawn, and features in his recently completed manuscript, Native Bird, for which he is seeking a publisher.

“It’s my first truly New Zealand-focused poetry collection, and part of its interest lies with the experience of immigrating here from the United States, with setting down roots and raising a family in a new culture.”

New Zealand birds feature frequently as objects of meditation and sources of metaphor, though not in this particular poem “Aubade”. Some of the poems have been published individually here or abroad.

The Montreal International Poetry Prize website says it aims to encourage “the creation of original works of poetry, to building cross-national readership and to exploring the world’s Englishes.”

The shortlisted collection will be published in hard copy in November.