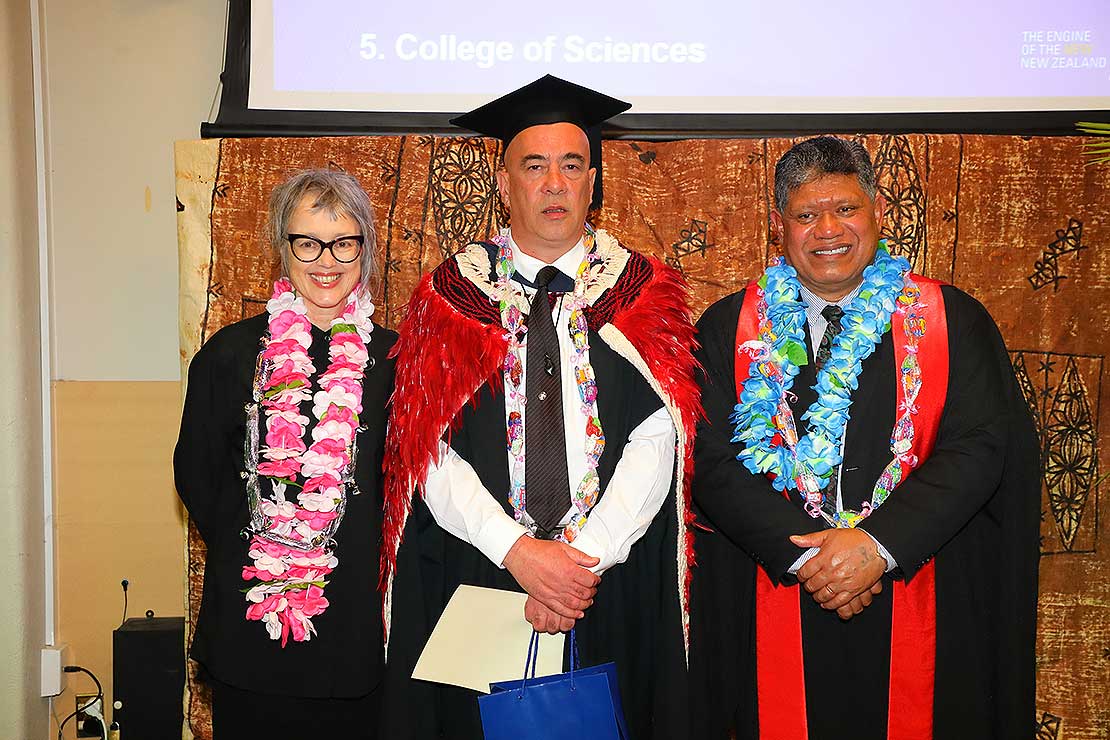 James (third from left) and Pacific graduates at the Pacific Graduation Celebration in May 2021. 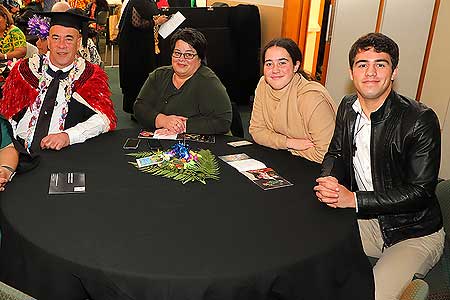 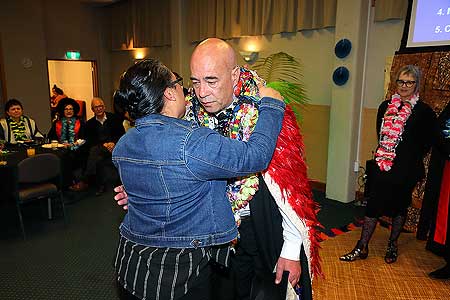 James receives a celebratory hug at the Pacific Graduation Celebration.

“I am not part anything. There are many worlds that are part of me.”

The 56-year-old identifies as Māori, Niuean, Sāmoan, English and Irish.

“My father gave us a way to connect to all the ethnicities we belong to, by looking at what’s similar and valuing what’s unique about them. I’ve encouraged my kids to walk in all those worlds too.”

“I was working six 12 to 14 hour shifts a week to maintain our mortgage and look after our kids. Then my youngest started school so my wife started working at a call centre. I was still doing six-night shifts, coming home on a Sunday morning, getting a pack of beer, and sitting in the sleep out, drinking and sleeping, and not connecting with my whānau, then Monday would come around and I would start the cycle again.

“I wasn’t happy, my wife could see that. Her words were, ‘Look, we’ve got a university on our backdoor step. Why don’t you go up there and see what you can do?’”

So, he did just that.

“I still remember walking up the main steps by the Registry Building at lunch time, and all I could see were Pākeha kids. I thought ‘Na, this isn’t me’, and I just about walked away. Then this kuia [older Māori woman] walked past me, and said ‘Kia ora, what are you doing here?’ and I said ‘Oh, look, I’m just thinking about studying’ and she said, ‘Come and have a cuppa with me.’ Turns out, she was a Māori Student Advisor.”

The struggle is real

The hurdles continued, but James and his whānau made it work.

“Once I started studying, I still had to do weekend shifts as a security guard, and every holiday, so I would finish exams in October, and I would be doing 50 hours a week until February, while my wife was working six days a week. I am lucky to have a very supportive and strong wahine who got me on to this pathway. My wife jokes that she’s also done a Bachelor of Social Work because she did most of my typing, and proof reading.

“I didn’t know how to construct a word document. I used to write out all my assignments on paper and my wife would get out an old laptop, that wasn’t connected to the internet, and type them up, put it on a memory stick and I would submit it using the computers in the library. So, you find different ways to study. Books are expensive, so I used the one-hour loan textbooks at Massey’s library, I photocopied or took notes, then put the book back.”

Being a mature student was also a learning curve, he says.

“Coming to university was a huge culture shock. I was older than some of the lecturers. Sitting in a room with 30 first-year students, most of them 18 to 25 years old. There were only four brown faces in the room – a Zimbabwean girl, a Tongan girl, a Māori girl, and me. But I think mature students bring mātauranga [knowledge] and life experience with them, and that’s really important.

“You get addicted to doing well and putting in your best effort. I hadn’t written an essay or sat an exam for more than 30 years. I didn’t know how to do a hanging indent – I used the space bar to get it across. It probably took me three times longer, but the proof was in the results I was getting.”

Studying also sparked another passion for James. He wants to change the way social work is taught, to create systemic change, especially for Māori.

“There is a saying ‘You must go through the kitchen to get to the taumata’, another word for paepae, where the speakers talk on a marae. The saying denotes a marae-based Māori developmental pathway. When you’re a child, you start off setting tables in the whare kai, putting the food out, then you start bringing out hot drinks and food to the manuhiri [guests] then you’re a dishwasher, a spud peeler, then maybe doing the hangi, older men are supervising while you watch the hangi. It was 32 years before I was ever asked to speak on my marae, so what do you learn in those years? The concept of whanaungatanga [kinship, family connection], manākitanga [hospitality and kindness], kaitiakitanga [guardianship and protection], all the tanga. These are things that you do, you don’t define them individually, they are interconnected. Then you go to university, and someone is defining them separately and trying to teach you how to do it.”

James secured a scholarship through Massey’s Te Rau Puawai academic support system, and says now it is about giving back.

“Students need networks, help building connections. When I wanted to quit, twice in the first year, my mentor came and saw me, talked me through it, got other students and lecturers to tautoko [support] me on concepts I didn’t get. So now it’s about giving back.”

James mentors 10 Māori Social Work students through Te Rau Puawai. Two are doing their masters, and the other eight are studying toward a Bachelor of Social Work. He also mentors several Pasifika students, outside of the scholarship programme.

James was also one of the first Māori and Pacific students to give the Valedictorian speech at the College of Health graduation ceremony in Manawatū in May 2021. His inspiring video has been viewed more than 9,500 times. He’s the first Te Rau Puawai graduate to be named Valedictorian.

After completing his Bachelor of Social Work, James got straight into the workforce, working as a Whānau Ora Navigator at Te Tihi O Ruahine Whānau Ora Alliance and He Puna Hauora Inc in Palmerston North.

“I have been so privileged for almost five years to work in a kaupapa Māori organisation where a te ao Māori viewpoint is the norm, not the exception.

He emphasises that it is a totally different approach to family-centred practice. “Our Whānau Ora approach is about what they want ­– their dreams, their plans, their actions. Helping professions tend to work across crisis intervention – telling people what to do. We take the approach of asking ‘What’s your moemoeā [dream]?’ and if you can crystalise that dream, if you can share that with me, find out what excites them, their passion, straight away you have made a wairua [spiritual] connection, a deeper connection with that person.”

James now has his eyes set on completing his PhD. He intends to research what whānau say the impact and outcomes are for them, after experiencing a Whānau Ora approach and being involved in the initiatives undertaken by the Whānau Ora Collective.