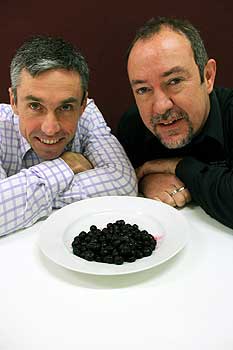 Watch the One News item here.

London fruit sellers may want to stock up on New Zealand blueberries after a study found athletes who eat them recover faster from exercise.

Massey School of Sport and Exercise head Associate Professor Steve Stannard worked with University colleagues and the New Zealand Institute for Plant & Food Research on the paper, which has just been published in the Journal of the International Society of Sports Nutrition.

Dr Stannard says the findings could help Olympians and other athletes return to peak performance faster after strenuous exercise.

He and his team used a novel method that compared one leg of a participant to the other leg. “We put the study participants on a Biodex machine and had them work the thigh of one leg very hard to damage the muscle,” Dr Stannard says. “They did 300 maximal eccentric contractions, which causes micro-trauma to the muscle’s fibres.”

In the first part of the study, participants were given blueberry smoothies before, during, and for two days after the exercise strength tests, and blood samples were taken to monitor the leg’s recovery. Several weeks later, the exercise was repeated on the other leg, but a smoothie without blueberries, and therefore with a different polyphenol content, was consumed instead. Ten female participants were involved in the study.

The blood samples showed eating the blueberries, although possessing a similar total antioxidant content as the control, produced a higher level of antioxidant defence in the blood. This was associated with improved rate of recovery in the first 36 hours in one particular measure of muscle performance.

Dr Stannard says it is not yet clear exactly why the blueberries help. “But it is probably linked to the superior anthocyanin content of the New Zealand blueberry fruit interacting with and assisting the body’s natural antioxidant mechanisms,” he says.

The team used New Zealand blueberries in the study, sourced from Northland. “For me the attraction of this study is that we’re using a real food,” he says. “It’s not a pill or a supplement, it’s fruit, grown in New Zealand and available at any shop.”

Plant & Food Research scientist Dr Roger Hurst says the study has come about from a building relationship with Massey’s School of Sport and Exercise in which further research on the benefits of blueberries for exercise is being undertaken.

"There is a huge amount of research still to be done. But this work is giving a wonderful indicator and we expect these exciting findings to further boost the desirability of New Zealand blueberries."