Nominations begin for Quote of the Year 2020 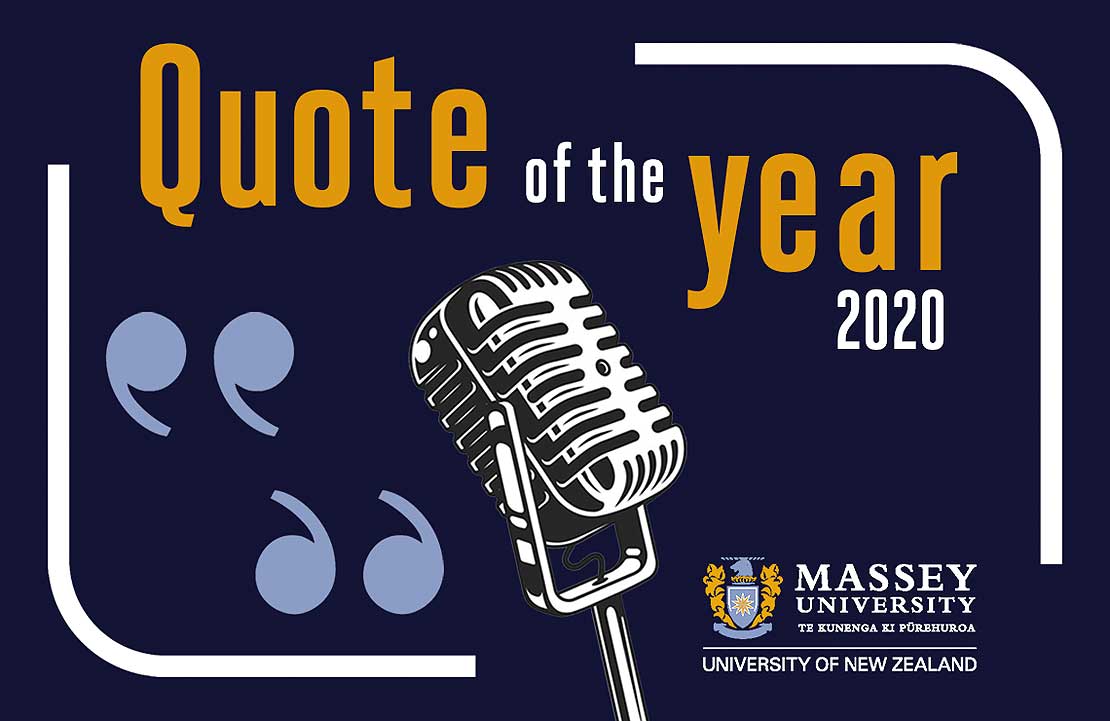 Quote of the Year 2020 draws on the public to nominate quotes and then vote for the winning quote once the top 10 are announced. The quest is on for the best New Zealand quotes of 2020, and Massey University is calling on the public to help find them.

Massey University’s School of Communications, Journalism and Marketing Senior Lecturer Dr Heather Kavan has been running the competition since creating it in 2011. She says from elections to lockdowns, there have been plenty of life-altering events to give rise to memorable one-liners this year.

“If there’s a phrase or sentence that stayed in your mind throughout the year, we’d love to hear from you.”

People have already been making suggestions, including ringing phrases from the lockdown, like “team of five million” and “we go early, we go hard”.

Other suggested quotes are more individualistic. National Party leader Judith Collins', “When my eyebrow goes up, it’s a joke,” and New Zealand First MP Shane Jones’, “I consumed about a gallon of red wine last night” are favourites, she says.

Since the competition began in 2011, the public have drawn on diverse sources to find the quotes.

All types of quotes are welcome. “The words can be rousing, tragic, beautiful, controversial, hilarious, unexpected, or even embarrassing.”

Given the rising use of social media during the lockdown, written quotes are likely to be popular too, she says.

“I’m especially keen to hear from Twitter users who have spotted entertaining tweets. From memory, there were amusing tweets on the marijuana referendum (or ‘reefer-endum’)."

How will the quotes be judged?

The competition calls on the public for nominations, then the university’s judging panel will then select the top ten before the public can vote on which one they think is the winner.

Dr Kavan says that voters often prefer different quotes to the ones experts choose. “We tend to look for variety because some voters like deep and meaningful quotes, while others scan the list for the funniest quote.

“A really good quote is usually one that people like, irrespective of whether they agree with the speaker’s viewpoint.

“Unscripted quotes usually do well, especially blunders. Speakers can spend years honing their command of language only to find that people prefer their mistakes to their eloquence,” she says.

First, check that the quote was said or written by a New Zealander or a person living in New Zealand this year and then you can nominate the quote.

You will be asked to provide the quote, the speaker’s name, a brief explanation of the context, and – if possible – a link to the source.

You can nominate more than one quote.

Nominations close at midnight on November 30. We will publicise the top ten in early December and you can vote for your favourite. The winner will be announced during the week of 21 December.

To get into the mood of remembering this year’s sparkling words, Dr Kavan suggests looking at the winning quotes from previous years. You can also watch a video highlight of the previous winning quotes.

“They are us.” – Jacinda Ardern speaking about Muslim victims of the Christchurch terrorist attack, in the aftermath of the killings.

"Winston Peters spends a huge amount of time on me, on Paula Ben- Benefit- Bennett." National Party leader Simon Bridges’ slip of the tongue when referring to colleague Paula Bennett.

"Please tell me that's not your penis.” – Shortland Street’s Dr Chris Warner (Michael Galvin) confronting his son about a photo, in a cliff-hanger ending.

"Here's the thing – none of us get out of life alive. So be gallant, be great, be gracious, and be grateful for the opportunities that you have." – Student Jake Bailey in a speech at his senior prize-giving ceremony a week after he was told if he did not get cancer treatment he would not be alive to give the speech.

“I play politics like Fijians play rugby. My role is smashing your face into the ground.” – Whale Oil blogger Cameron Slater after Nicky Hager's book Dirty Politics was released.

“One of the messages that I had was that this bill was the cause of our drought. Well, in the Pakuranga electorate this morning it was pouring with rain. We had the most enormous big gay rainbow across my electorate.” – Cabinet minister Maurice Williamson in his speech to Parliament supporting the gay marriage law.

“Zip it, sweetie.” –  Paula Bennett to Jacinda Ardern in Parliament.

"I've been internalising a really complicated situation in my head." – Actor Darcey-Ray Flavell in the NZTA drink-driving ad where a young man is pondering all the arguments for and against telling his friend not to drive.