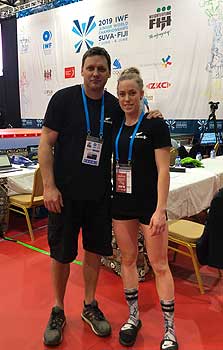 Nineteen-year-old Samantha Hansen doesn’t let the weight of study get her down – she embraces it. The Bachelor of Sport and Exercise student, who’s majoring in Exercise Prescription, is heading to Samoa next week to compete in the Oceania and Commonwealth Weightlifting Championships.

“I originally got into CrossFit through a fitness club at Manawatū College, run by my now weightlifting coach Shayne Nation,” Hansen says. “I trained in CrossFit for around three years and competed quite a bit. Olympic weightlifting is a big part of CrossFit so my coach decided to enter me in a weightlifting competition to see how I went. A month later, I got an email from Olympic Weightlifting New Zealand, saying I had been selected for the Youth World Championships. It was amazing.”

The second-year student, who studies on the Palmerston North campus, quit CrossFit in July last year to concentrate on weightlifting. “My goal at the moment is to qualify for the 2022 Commonwealth Games and hopefully the 2024 or 2028 Olympics. Next year is my first year as a senior lifter [over 20’s], so it will be a bit of a transition year for me.”

Hansen says she decided to study sport and exercise, because it would allow her to continue training and competing, while working towards her other goal – opening a weightlifting facility.

“I would really like to open my own weightlifting business close to home to bring new people into the sport, grow my own coaching skills and continue to train and compete. I am also really interested in the medical field, so I could potentially see myself returning to study and completing a degree in paramedicine. I would love to pursue a career as a paramedic when I retire from sport.”

Hansen, who lives in Foxton, is a member of Massey University’s Academy of Sport programme which provides access to support including on-campus gym membership, sports science services, topical seminars and individually tailored assistance with balancing study and sport.

“The Academy of Sport has been incredible. I’m not sure how I would have managed my study and sport without their support. They are a massive help when I’m travelling for competitions as they can communicate with lecturers and organise extensions if needed, to relieve some stress and allow me to compete at my best. They have also been a big personal support through some tough times and I thank them for that. The financial support has allowed me to accept selections to international events which come at a big cost in a self-funded sport.”

She says also owes a lot to her family, coach and weightlifting community, who have been incredibly supportive on her athlete journey. “Everyone is always so quick to jump on board and do all they can to help get me to international events and I can’t put into words how grateful myself and my family are for that.”

On top of studying, training and competing, Hansen also works part-time at Manawatū College alongside her coach, helping out with the high performance sports programme he created. “We have a small group of students all in different sports, so I just help with coaching four days a week. We have two weightlifters in there who I spend a lot of time with, helping them with their technique and cheering them on with their training. We have also started doing team workouts on a Friday which I get the pleasure of joining in on. It’s awesome working with a group of motivated students,” she says.

“There are four younger students in year 10 who I coach in class and take them through the training Shayne programmes for them each day, encouraging them and making sure they are moving safely. It’s great for my own development as an athlete and as a coach.”

Badminton star hits a balance between study and sport