Dr Negar Partow (middle row, fifth from right), was one of two women who attended an international defence conference in Indonesia recently. 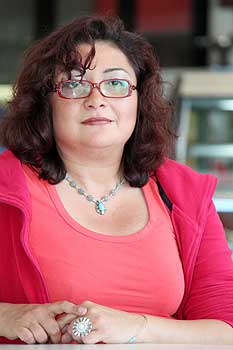 One of the remaining bastions of gender inequality is the security and defence sector – a reality I was reminded of when I participated in an international conference on defence science in Jakarta recently.

I was one of two women among 50 representatives from organisations and universities participating in the conference – one from the United Nations and one (me) from Massey University in New Zealand.

It was yet another defence conference with its routine and specific make-up, far from the ideals that we teach. The fabric of the conference demonstrated the obstinacy of defence industries and universities against gender equality as they defy or ignore the endless efforts of female academics, think tanks and civil society groups.

We are, however, almost unique in New Zealand. Yes, it is correct that our security apparatus still suffers from systemic sexism and racism. But our flexibility to change and our commitment to fairness allow us to be different and offer something unique to the world of security.

I began teaching in the New Zealand Defence Force’s Command and Staff College in 2005 as a guest lecturer. Here I was, a young female academic from a different ethnic group and with an accent. It would have been a bad idea in other defence forces, but not in New Zealand. On the contrary, my different perspective on the geo-strategic map of the Middle East and comments on gender equality were welcomed. They made me feel included in the security community of the country.

Over the years, I have had the opportunity to work with amazing women in the security field who, like me, were concerned and frustrated over the lack of gender equality in security practices and studies. We somehow found our fighting voices in New Zealand. Through the years we all learnt that our struggle will never end but also learned how to appreciate the spaces that we make in the practice of security, and the study of defence and security.

In 2010, Massey University signed a Memorandum of Understanding agreement with the Brunei Command and Staff College for teaching the Master of International Security Degree. At the time the United States, Australia, the United Kingdom and New Zealand as well as the ASEAN countries sent officers to study in the one-year programme in Brunei. None, however, sent female officers to the programme, arguing that the “cultural environment” of Brunei would be difficult for women to tolerate.

Massey University, however, did. Dr Anna Powles and I coordinated and taught the two conceptual papers in the programme for eight years. We travelled to Brunei each year and lived there for a month to deliver our courses. We were not treated any differently from our male colleagues by Massey and this equal treatment became the un-written rule for everyone in Brunei. We both taught gender equality and feminism as a part of our courses and never received any negative feedback about these lectures. We discussed the importance of female participation in the course at times when we only had very few Bruneian female officers and occasionally a Singaporean female officer in the course.

It was again the New Zealand Defence Force that broke the cycle and sent a female officer to Brunei during the last year of our contract.

Gender inequality still dominates the international security and defence environment beyond Aotearoa. Being one of the only two female participants in the 2019 defence conference in Jakarta reminded me the importance of our struggle for gender equality and the difference we make as a country by being fair, open to new ideas and to change.

Our struggle could be enriched by celebrating the work that we have done, the role we play in the world and the glimpses of hope we can find in our uniqueness. We are the hope that many generations of women before us fought for. We want to see the fruit of our struggles in the new generation of women leaders and thinkers who will make our world a better place.

Dr Negar Partow is a senior lecturer in security studies at the Centre for Defence and Security Studies.