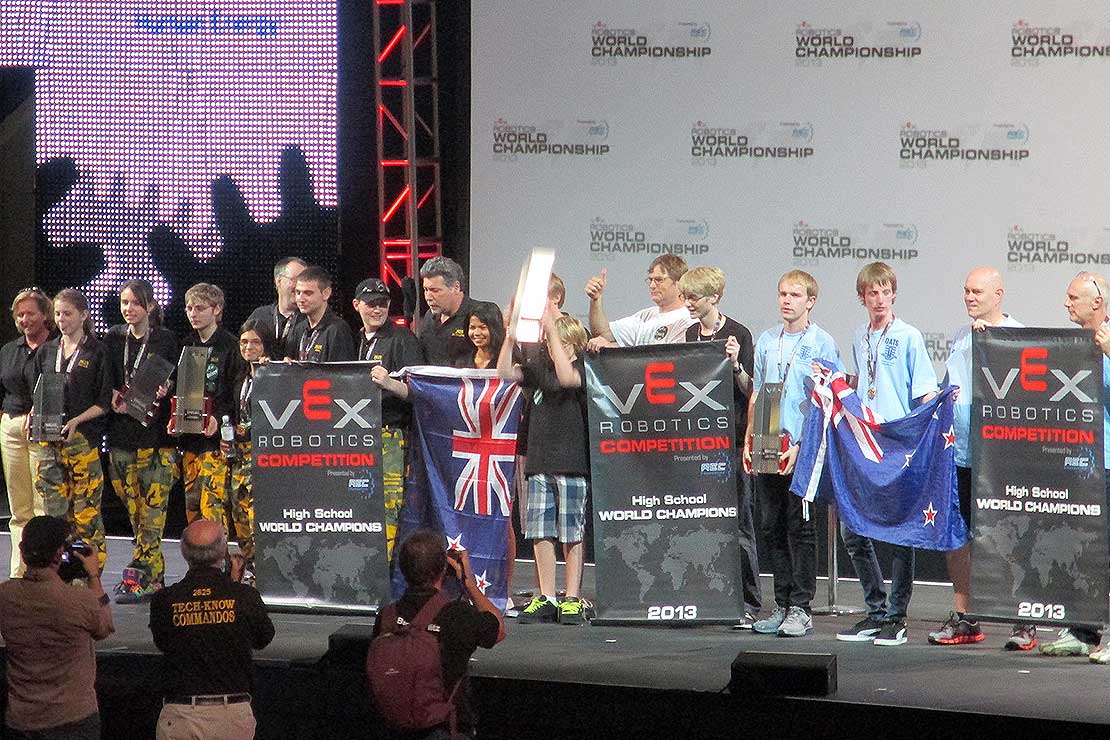 The teams also finished first and second respectively in the Robot Skills competition with Lynfield achieving a world record score of 400 points.

American-based VEX robotics was launched in New Zealand in 2008 by Massey University. In 2009 the University held the first national VEX competition at its Albany campus and has provided mentoring for participating schools ever since. This year Massey University engineering lecturer and robotics mentor Frazer Noble accompanied the teams to the competition.

Associate Professor of Mechatronics in the School of Engineering and Advanced Technology Dr Johan Potgieter says the competition results are an example of Massey University taking the best of New Zealand to the rest of the world.

“Our engineering students and academic staff work closely to mentor these teams, and it’s great to see them consistently do well in such a big competition,” he says. “It fosters so many different skills that these young people can build on, and also gives them a taste of the fun engineering can be.”

Glenfield College from Auckland won both the World Educate Award for their “astounding integration of robotics into their curriculum” and the Technology Division Community Award while AGC Parnell took out the Spirit Division Amaze Award.

Massey University’s Team FEAR from Palmerston North won the College Create Award and finished second in the College (university) Division after a qualification challenge between 48 teams. They were eliminated in the quarter-finals.

The competition, held in Annaheim, California, pitted more than 15,000 participants in 420 teams from intermediates, high schools and universities from 24 countries across the globe over four days. Eight teams from New Zealand qualified to attend and, of the 15 finalist teams, five were from New Zealand.

VEX is run in New Zealand by Kiwibots, a non-profit charitable trust whose mission is to inspire a passion for science and technology in high school pupils, headed by National Manager Chris Hamling.

VEX Robotics was developed in response to a worldwide shortage of engineers. It is a platform for high school pupils with an interest in science, technology, engineering and maths (STEM) to participate in a challenging game requiring the building of robots and interactive scrimmages using teamwork, leadership and problem solving.

In the competition VEX teams get together to build and develop robots to compete in that season’s game with the aim of scoring the most points possible in qualification matches, elimination matches and skills challenges. Teams form alliances composed of two teams each to compete in matches. The 2013 competition game was Sack Attack! and the game for 2014 was unveiled at the World Championships as VEX Toss Up.

The world champion teams will arrive back in New Zealand on Thursday April 25 at 2.35 pm.

For more information on Kiwibots, go to: http://www.kiwibots.co.nz

Universities: the future is here and it is online