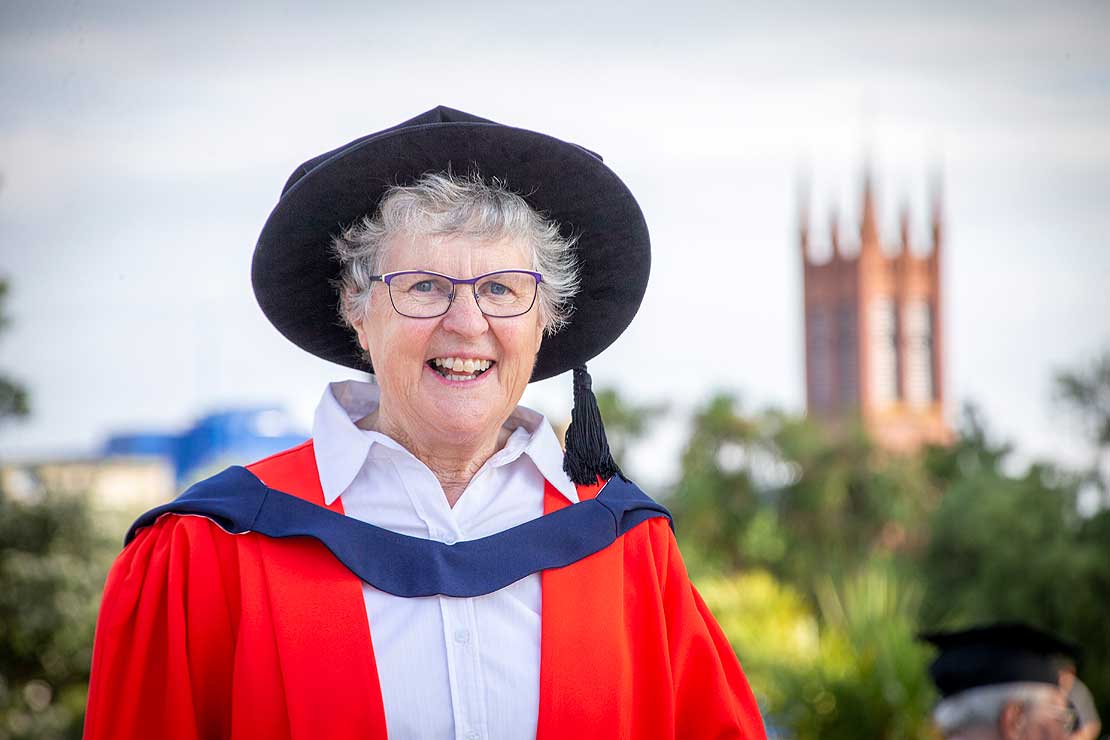 Former Palmerston North mayor Jill White was awarded a Doctor of Literature for her advocacy on environmental, social and local history issues.

Former Palmerston North mayor and Manawatū MP Jill White has been awarded an honorary doctorate in recognition of her advocacy for environmental issues and local heritage, and making a difference through local body politics.

Dr White, who has Bachelor of Arts (honours) and Master of Arts degrees from Massey, was awarded a Doctor of Literature (honoris causa) at the College of Humanities and Social Sciences ceremony on Friday.

Massey historian Dr Geoff Watson says it is “highly appropriate that in 2019, which marks 100 years since women were granted the right to stand for Parliament, that Jill White be awarded an honorary doctorate in recognition of her pioneering political achievements and her advocacy on environmental, social and heritage issues.”

Dr White made history as the first woman elected as MP for Manawatū, representing the Manawatū electorate between 1993 and 1996 and serving as a list MP between 1996 and 1998. In 1998, she successfully stood for Mayor of Palmerston North, becoming the city’s first female mayor and serving between 1998 and 2001. She also served as a city councillor for Palmerston North between 1983 and 1992; the Manawatū-Wanganui Regional Council between 1989 and 1994 and Horizons Regional Council between 2007 and 2013.

Dr White’s deep interest in the environment was informed in part by her studies at Massey, where her master’s thesis focused on the relationship between Palmerston North and the Manawatū River.

She has worked with many social organisations, including the Palmerston North Methodist Social Services, Age Concern and the Multi Ethnic Council. She has also made a significant contribution to local history and heritage – she is a longstanding member of the Palmerston North Heritage Trust, and has made a significant contribution to local history as a regular contributor to the Manawatū Journal of History and the preserving records and artefacts of St Paul’s Church on Broadway.

“Jill’s career epitomises Massey University’s philosophy of lifelong learning and her contribution as a political pioneer for women and her extensive community service make her an eminently worthy candidate for an honorary doctorate,” Dr Watson says in his nomination.

Historian, Associate Professor Margaret Tennant, says in her supporting testimony that; “Jill has a more extensive experience of politics in its various forms, electoral and associational, than any other Manawatū woman I am aware of, and she remains a source of sound advice and a model of ethical behaviour to others with similar aspirations.

“During her term as Mayor, Jill placed considerable emphasis on strengthening the relationship between Massey University and the city. She also initiated a modernising of Palmerston North’s image and the redevelopment of the Square in its present form.”

Her background in science and interest in the environment came to the fore in her parliamentary career, in which she was Labour Spokesperson for Research Science and Technology; Environment and Biosecurity and Crown Institutes. Her expertise in this field was further recognised in 2000 she was appointed Chair of the Environmental Management Risk Authority

Building on her background as a public health nurse and teacher, she has served on a wide range of community organisations including the Palmerston North Community Services Council; the District Committee for the Prevention of Child Abuse and National Council of Women.