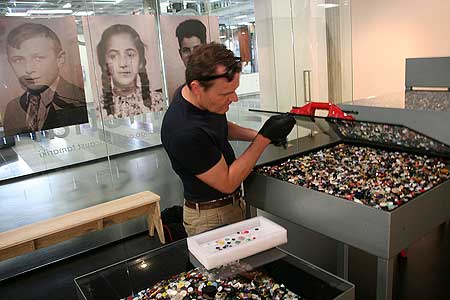 Matthijs Siljee adds some buttons to his exhibit of ascending tables 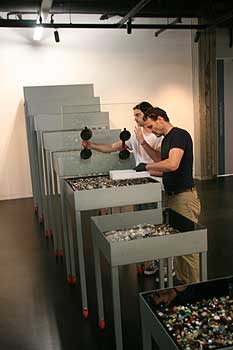 A moving memorial to children murdered in the Holocaust has special resonance for its creator, School of Design senior lecturer Matthijs Siljee.

His fellow native Dutch were placed under Nazi occupation throughout World War II, and his project consisting of nesting tables containing thousands of buttons, pays homage to the Netherlands and Europe’s most vulnerable citizens of the war – the children of the Holocaust.

Mr Siljee, who is assistant head of the School of Design at Massey’s College of Creative Arts, was invited by the Holocaust Centre of New Zealand to design a travelling memorial for the children who were killed between 1939 and 1945. It also acknowledges the second-generation families of victims and survivors as well as New Zealand’s Jewish community.

His design consists of 12 steel nesting tables, each larger than the previous one, escalating to an uneasy height of 2.4 metres.

“Even the tallest person is unable to view the top, conveying the idea of something unreachable or unattainable,” Mr Siljee says.

The combined total of 1.5 million buttons represents all the children killed in the Holocaust for reasons of disability, ethnicity, religion or as reprisal against dissent. The buttons were collected by pupils of former Moriah Jewish Day School School principal Justine Hitchcock. With the buttons as a teaching aid, she attempted to visualise the vast number of children that died.

Mr Siljee says there is nearly one metric tonne of buttons with a volume of 1.26 cubic metres laid within the tables which are mounted on plastic wheels wedged to welded steel legs. The industrial metal of the cabinets reflects the Nazi bureaucratic machine and the Holocaust’s industrialised death camps; the red wheels echo a child’s toy wagon.

Mr Siljee has been building the memorial at a workshop located beneath the Museum Building at Buckle St where he first worked after emigrating to New Zealand in the mid 1990s.

The memorial is to be officially unveiled at a function at the National Library tonight, opening to the public on Friday continuing till March 29, 2019. It will then travel to the new Central Library in Christchurch where it will be exhibited from May till August. Thereafter, it will go to Auckland for a six-month residency. In 2020, the memorial will start a tour of New Zealand’s main regional city centres.  An education programme and forum series addressing such topics as the refugee experience in New Zealand, standing up to discrimination and prejudice and current perspectives on the treatment of people with disabilities is also expected to be part of exhibition events.

“The central ethos and lesson underpinning the Children’s Holocaust Memorial is a preparedness to stand up to discrimination and prejudice – to be an upstander. This enduring lesson is more relevant now than ever,” Mr Siljee says.

Growing up in the Netherlands, Mr Siljee was made acutely aware through family stories and lessons from school on the traumatic legacy the Nazi persecution left with remaining European communities.

“It’s a history that has complicated lives for many families,” he says.

“But the most important thing is what lessons do we take out of it for today,” noting that an emerging rise in nationalism was once again fuelling combative attitudes from more than 80 years ago.

“Looking at the current geopolitics of it, I see a lot of patterns that are coming back. I recognise the same group hysteria, almost identical to the 1930s, as told by my family and taught at primary and secondary school.

“Working on this memorial has been an opportunity to revisit these stories and bring certain things to closure about this period,” Mr Siljee says.