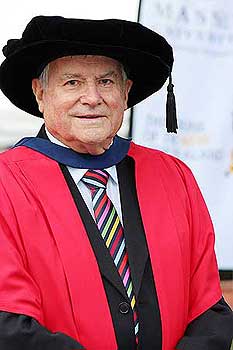 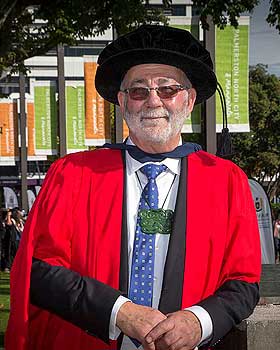 Sir Kim was awarded an Honorary Doctorate in 2017

Respected historian Professor Lineham, who retired last month after 40 years at the University, was made a Member of the New Zealand Order of Merit for services to religious history and the community. He has written and lectured extensively on the religious history of New Zealand, from Māori prophets to Catholic missionaries, during his distinguished career, with his earliest work focussing on the 18th and 19th century history of British Protestant sects.

Professor Snook, who died on October 19 at the age of 85, served as the head of the Massey’s Department of Education from 1985-90 and was dean of the faculty from 1989-93. In 2012 he was awarded an honorary doctorate for his outstanding service to the University and contributions to education in New Zealand and internationally.

Professor Prebble was appointed as Massey’s inaugural principal extramural and international in 1999 and was responsible for the University’s strategy in relation to distance students. He had held the position of director of extramural studies since 1986.

The Warehouse founder and Honorary Doctor of Commerce recipient (2002) Sir Stephen Tindall received New Zealand’s highest honour, having been made a Knight Grand Companion of the New Zealand Order for services to the business, the community, and the environment. In 2014 the University, in partnership with the Warehouse Group, established the Sir Stephen Tindall Chair in Retail Management.

Alumnus, honourary Doctor of Literature recipient (2017) and social justice advocate Dr Kim Workman was made a Knight Companion of the New Zealand Order for services to prisoner welfare and the justice sector. A former police officer turned prison reformer, Sir Kim retired from his role as national director of Prison Fellowship New Zealand in 2008 before serving a three-year term as Families Commissioner. He began studying sociology part-time by distance at Massey in 1972 and completed a Bachelor of Arts in 1985.

Lieutenant General Timothy James Keating, of Lower Hutt, (Postgraduate Diploma in Arts 2006) was made a Companion of the New Zealand Order of Merit for services to the New Zealand Defence Force.

Other Massey recipients of Member of the New Zealand Order of Merit are Rosalie Goldsworthy of Palmerston (Graduate Diploma of Business Studies 1993) for services to wildlife conservation, Viv Maidaborn of Wellington (Bachelor of Social Work 1982) for services to human rights and social entrepreneurship, and Dr Karlo Mila, of Auckland, (Doctor of Philosophy 2011) for services to the Pacific community and as a poet.

Sonia Faulkner of Auckland (Diploma in Education 1982) was made a Companion of the Queen’s Service Order for services to Girl Guiding.

Margaret Campion of Whanganui (Bachelor of Arts 2011) was awarded a Queen’s Service Medal for services to community.